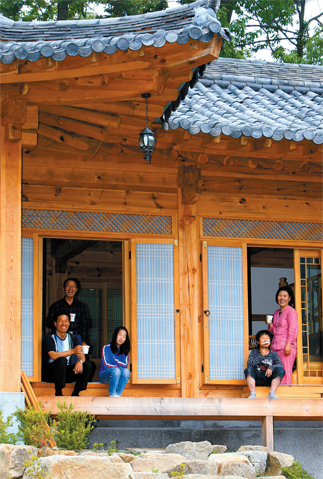 A hanok in Muan County, South Jeolla, was built with traditional materials, such as tiles and wood, but the inner facilities got a modern makeover. By Oh Jong-chan

Modernization has its benefits, for example, few would complain about advances in modern dentistry techniques, as the American writer P. J. O’Rourke once said.

The downside to progress, though, is quite often the loss of heritage and tradition, and in Korea, a case in point has been the wholesale disappearance of hanok, the traditional Korean house.

But all is not lost.

In a bid to promote hanok culture and provide people with an opportunity to stay in these gracious dwellings, the government set up a Web site last month containing just about everything you need to know about lodging in hanok across the country.

In addition, the tourism sector helps promote various hanok around the country, many of which are high-end and offer luxurious accommodation in bucolic surroundings.

Bukchon Hanok Village in northern Seoul has also become a popular spot for photographers and daytrippers keen on catching a glimpse of Joseon-era buildings.

A relatively recent push in the hanok direction is under way in South Jeolla where the provincial government is gearing up to transform the whole province into a gigantic center of hanok.

For instance, the Wando Forest Museum is expected to be the largest Korean-style built as a single unit in the country, apart from old palaces here. The museum is scheduled for completion next month in Wando County, South Jeolla.

In addition, the governor’s official residence and a government-operated business center were also built in hanok style, prompting other local governments around the county to visit with the view of possibly replicating the new drive.

Even bus stops in the province have been designed with hanok in mind.

These developments are part of the ongoing Happy Hanok Village Project, launched in 2006, in which aging farming and fishing villages have been transformed into areas where people want to settle down.

“Our ancestors created a type of housing that fits most with our environment, using years of experience living in these locales,” said South Jeolla Provincial Governor Park Jun-young, an admirer of hanok architecture.

Korea’s march toward wealth and prosperity beginning in the 1960s and 1970s signaled the end of most hanok villages in urban areas. Thatched roofs and mud walls gave way to cement and slate-roofed houses, which were easier and cheaper to build, the governor explained, but, of course, not as charming.

“I had long been mulling the idea of turning a number of farming and fishing villages in our province into places where people would wish to live today,” said the governor.

“Hanok is not only good for your health, but also matches well with the scenery of our farming and fishing villages,” he added.

Under South Jeolla’s ambitious hanok housing project, the number of households that have rebuilt their homes into hanok increased fourfold to 341 in 2008 from 85 in 2007. The number is expected to reach 700 this year.

According to the provincial government’s rules for the project, if more than 10 households in a village apply to build a hanok or convert their existing residence, each is granted a maximum 20 million won ($15,835) as a subsidy and a loan of up to 30 million won.

South Jeolla’s hanok housing project seems successful by all indications. In Yaksil Village in Muan County, there were 28 hanok households for 52 people three years ago. Now there are 38 houses for 87 people. And 10 people from outside the region have moved to the village seeking a so-called hanok life.

“You need a lot of workers to build a hanok, which translates into jobs and a boost to the regional economy,” said Lee Seung-ok, director of the Happy Hanok Village division of South Jeolla’s provincial government.

There are some other benefits, too, to going hanok. Farmers and fisherfolk can earn an additional income by taking in lodgers, mainly tourists wanting a taste of the slow life.

Moon Jae-gi, a resident in Bigeum Island, a two-hour ferry ride from Mokpo, South Jeolla, is a salt producer, but he also runs a guest house in his hanok.

Moon transformed his home three years ago with a subsidy from the provincial government worth 50 million won plus 200 million won of his savings.

During construction, he converted two rooms into guest rooms with en suite bathrooms. “It costs 50,000 won a night. As for this month, two rooms were fully booked for every weekend and I’ve got some reservations during weekdays as well,” Moon said.

Currently, 11 of the 43 hanok villages in South Jeolla, involving 117 households, are benefiting from this hanok-themed minbak program. Minbak means homestay in Korean.

The South Jeolla government isn’t planning to stop here. Gurim Village in Youngam County will hold a Hanok Architecture Exhibition in November, the first of its kind in the country.

“Visitors will be able to stay in a genuine farming village where hanok traditions and culture prevail,” said Jeong Jin-hwan, an official from the Happy Hanok Village division of the South Jeolla government.


“The exhibition will serve as an opportunity to let people know about various advantages of hanok and to promote hanok culture around the country,” he added. 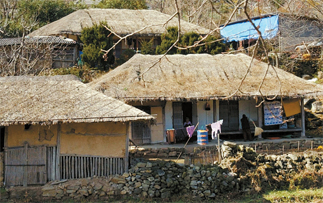 Thatched hanok were common before the 1970s.

A traditional Korean house contains time-weathered wisdom. It’s a style of architecture that was designed to blend in with the environment and climate throughout the year.

The inner space of a hanok is cool in summer thanks to the tiled roof and packed earth (ocher) between it and the ceiling. 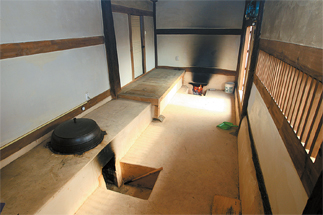 Thatched hanok were common before the 1970s.

In winter, the underfloor heating system, called ondol, keeps everyone toasty. Ondol has two different parts - the warmer and the cooler - depending on its proximity to the agungi, a traditional kitchen fireplace. The agungi provides the heat for the ondol.

Such a heating structure enables a dweller when lying down to keep his feet warm and head cool, which is supposed to be good for your health, according to Oriental medicine.

The ondol had another useful function: getting mosquitoes to buzz off. The smoke from the underfloor heating system passed through a vent that removed the soot, creating a cleaner discharge from the chimney.

This sootless smoke proved effective in shooing away irritating mosquitoes rampant in summer.

Korean people stayed healthy in old times when there were no proper medical facilities thanks to agungi, ondol and their by-product, sootless smoke, hanok experts say.

Hanok were usually built half way up a mountain and faced south or east. The basic idea follows feng shui beliefs that the ideal site for a residence has a field or water in front and a mountain at the back.

The design also incorporated a natural ventilation system. The daecheong-maru, the space between the ground and the hanok floor, through which cool air from the mountain at the rear could circulate.

The mud-plastered walls also had a special function. They kept out heat in the blazing summer months and kept families warm during winter.

Mud controls humidity inside the house as well, absorbing moisture when it is damp and producing it when it is dry. Mud also absorbs the smell of cooked food or cigarettes.

Though the term hanok usually conjures up the image of a house with a tile roof, poorer people’s dwellings originally had thatched roofs.

Thatch roofing was swapped for tin or slate during the Saemaul Movement, which translates as the “new community” movement. The program was initiated by the late President Park Chung Hee in the 1970s to modernize the countryside.

*The article was written in consultation with Park Gang-cheol, professor of architecture at Chosun University, and with the Hanok Culture Institute in Seoul.