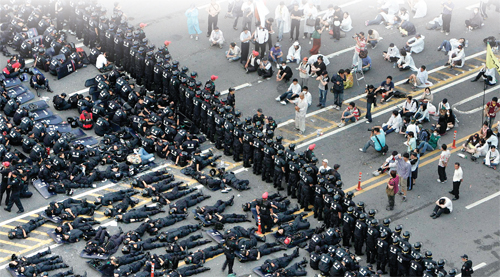 Riot police rest behind the frontline during protests in Seoul last year against the resumption of U.S. beef imports. [JoongAng Ilbo]

At this time of year red banners, shaven heads decorated with headbands and pitched battles against riot police are part of the scene in South Korea. The only difference this year is that the stakes are higher than ever.

The latest clash between the authorities and disgruntled labor unions occurred 10 days ago. Hundreds of members of the Korean Confederation of Trade Unions, one of two umbrella labor unions here, took on riot police, with sharpened bamboo spears in Daejeon. The confrontation left 104 officers and some 50 protesters injured. 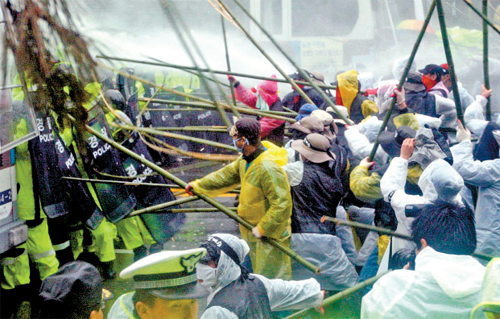 Union workers use bamboo poles during a clash with police in Daejeon earlier this month.

President Lee Myung-bak’s administration wants to maintain public order but only with the absolute minimum display of force. The president is already facing flak from opposition parties and, to some extent, the public for the heavy-handed investigation into a bribery scandal that engulfed the late President Roh Moo-hyun.

Roh’s suicide over the weekend has added to the complexity of law enforcement. Many mourners have been angered at the sight of heavily-armored
riot police around the makeshift mourning altar outside Deoksu Palace in downtown Seoul where thousands have been lining up to pay their last respects.

Of course, the authorities are anxious to avoid a repetition of last year’s massive street protests that brought the country to a standstill. The demonstrations, a response to the resumption of U.S. beef imports, quickly snowballed into a general free-for-all involving anyone with a grudge against the government.

“It’s a volatile situation. You just don’t know what is going to happen,” said Jeon Sang-jin, a professor of sociology at Sogang University. “We have seen in the past how an incident or a series of events have brought the masses together. The government will be keeping its fingers crossed.”

Already, there are signs of unrest. KCTU officials argue that the police initiated the recent violence in Daejeon by using excessive force - water cannons and batons - against union members. The union men claim they were staging a peaceful march to commemorate a union leader who had taken his own life recently.

Naturally, the authorities say they were only trying to uphold the law but in the fog of protest, the line between what is legal and what is not is often blurred.

Until the weekend, the conservative Lee Myung-bak administration was trying to capitalize on the situation. President Lee made a point of singling out the “bamboo stick” incident in a cabinet meeting, calling it one that damaged the country’s “national image” abroad. He urged stern measures.

Promptly, in a follow-up meeting last week led by Prime Minister Han Seung-soo and security-related cabinet ministers, the government announced it will effectively ban all mass outdoor rallies downtown in a bid to end violent protests by labor and civic activists.

This is seen by some as a calculated move by the Blue House to lay the groundwork for an upcoming discussion in the National Assembly next month concerning the passage of several amendments to significantly change the country’s labor market.

At hand is an amendment to extend the length of service from two to four years before employers are required to change the status of irregular workers to regular workers.

Successful passage of the amendment could mean that a massive number of irregular workers employed since the original irregular workers’ law took effect in July 2007 will be fired this July when employers need to change the workers’ status.

With another bill allowing multiple labor unions at workplaces waiting in the wings, the KCTU is talking tough. Asked what would happen if the Grand National Party used its overwhelming majority of 170 seats out of 296 to bulldoze the bills through the National Assembly, Lee Seung-cheol, an official of the KCTU, was blunt in his forecast.

“If the government chooses to ignore our demands, we’ll show we can play hardball, too,” he said.

Right from the beginning, President Lee has preached that “law and order” should be the virtues of his administration. That point has been underlined by the president on numerous occasions.

To make good on his promise to restore authority, a special police unit was set up last year dealing exclusively with violent protesters. Civic groups have made comparisons with the notorious Baekgoldan, or “White Skull Corps,” created during the military regime of former President Chun Doo Hwan in the 1980s.

Baekgoldan units had a reputation for their relentless pursuit of demonstrators. The officers’ white helmets and blue jackets became a symbol of suppression of democracy during that era.

The newly formed unit is currently a 1,700-strong force, but it’s expected to grow to 14,000, eventually replacing the present riot police units. In addition, at the end of June last year, the government announced that a no-tear-gas policy dating back to 1998 would no longer be observed if circumstances made its use necessary.

However, government officials seem to be less gung-ho now. “It’s certainly a difficult situation. We wish people would not get so emotional,” said a Blue House official declining to be named. “The death of the former president is a separate incident and should not be linked to any anti-government movement.”

More than two decades of democracy have transformed Korea. Economic prosperity, coupled with the freedom that a fully functioning democracy provides, has transformed this once economically backward place into an economic tiger in the region.

Today people no longer fear the police as they once did. Gone are the days when citizens would flinch at the sight of black jeeps during the days of the military regime of former President Chun.

In fact, in a country where guns are outlawed and violent crime relatively rare compared to countries such as the United States, the police lack authority. It’s common to see drivers arguing with a police officer over a traffic ticket, and drunks vandalize the police stations they are taken to.

It’s fair to say that Koreans often view a police officer as some distant uncle reproaching a teenager for coming home late.

Experts like Pyo Chang-wan of the Korea National Police University say the country’s police have to battle mistrust that stems from the country’s past of military dictatorship.

“The police used to be an enforcer of regimes suppressing democracy, and that perception has not completely vanished,” said the professor. “The public has also seen so many corruption cases involving police officers that there is simply too much mistrust prevailing and that leads to a lack of respect for the uniform.”

Pyo said the police here are only seen as enforcers of the law unlike in countries such as the United States where the police are considered representatives of the people. The professor also attributed the problem to a lack of checks and balances to reduce the possibility of abuse within the police force.

“There is also a distorted view on equality. People tend to think that on minor issues where some people get away [with infractions], such as traffic tickets, it’s unfair to be held responsible when caught,” the professor said, adding that people who raise their voices against officers did so because they have witnessed such scenes on television and in movies. Subsequently, they expect to get away with misdemeanors.

At least when it comes to street protests, in the eyes of the police, harsher measures are justified in what many believe is the best way to cement authority and put an end to the vicious cycle of hide and seek between police and protesters.

“Our policy is very clear. We want to catch culprits who repeatedly engage in violent acts,” said an official at the Seoul Metropolitan Policy Agency speaking on condition of anonymity. “Make no mistake, these are not mere protesters. They are professionals and they are very good.”

The power of labor unions like the KCTU, which claims nearly 750,000 members in some 2,000 affiliated unions nationwide, is unmistakable.

The KCTU actually signed an MOU with the police promising a peaceful demonstration on May 1 (Labor Day) this year. In 2005, South Korean protesters wielding bamboo sticks in Hong Kong protesting the opening of agricultural markets made international headlines.

Decades of protests have instilled “protest fatigue” in the average citizen’s mind, but some experts say the social cost is tremendous.

Cha Seong-min, a professor at Hannam University, and Kang Shin-won, a professor of Social Work at Sunchon National University, estimated in a study earlier this year that the average social cost for a legal demonstration was 31 million won ($24,955) and 91 billion won for illegal ones.

The professors attributed the high cost to loss of business, traffic congestion, police deployment costs and indirect damages for citizens. In 2007, the police registered 11,904 legal protests while 64 were classified as illegal.

In its latest World Competitiveness Yearbook, the International Institute for Management Development listed Korea as 56th in the labor-management relations category.

The country has been in the cellar for several years in that particular sector, a fact that has been frequently cited as a concern by foreign companies operating in Korea and potential investors.