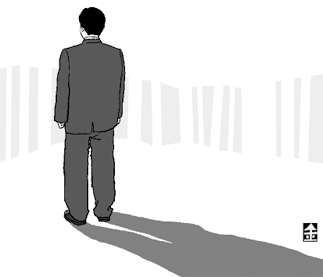 There was one image Chinese author Zhu Ziqing (1898?1948) could never forget. After attending the funeral of his grandmother, his unemployed father saw him off at the train station. As the train pulled away, Zhu saw the back of his father - a sight that would remain with him forever.

This is the full story of “Beiying (Retreating Figure).” In China in 1925, a time of great insecurity, father and son joined the funeral of the father’s mother before parting ways at the train station.

The son headed for Beijing to continue his studies. His father followed him into the carriage to see him off, but decided he wanted to buy his son some mandarin oranges for the journey.

He got off the train, crossed the railway tracks and pulled his small, weary body onto the platform.

In his shabby clothes, the father moved awkwardly. Every pained movement carved a deep impression on his watching son’s mind.

The author confessed, “At that moment, when I saw my father, tears quickly welled in my eyes.”

The story is regarded as a classic of Chinese modern literature. It portrays the painfully deep emotions of a father and son during times of war.

The sight of his father’s back conjured up feelings of compassion and longing in the author.

From behind, a person often looks sad. Even if the person is successful, the view of his back reflects insecurity. Insecure feelings and weakness as a human being are revealed in the shoulders.

The view of a person’s back and the shadow that one casts often spur sentimental feelings in people.

In her song, “My Love’s Shadow,” Roh Sa-yeon sang, “My love walks ahead, casting a long shadow behind him ... As I am about to step on his shadow, my heart becomes full of sorrow.”

President Roh Moo-hyun is gone, leaving behind many controversies. The sight of his back is sad and fragile. People mourn the former leader, a man who walked with the posture and air of a common man.

We should not be too quick to pass judgement on Roh. It is meaningless to speak ill of him or to demand that the incumbent administration deliver an apology for the tragedy.

Roh wrote in his will, “Don’t blame anyone” - surely a message for reconciliation.

We need to think seriously about the meaning of his last words, especially in light of Korean society’s never-ending ideological battles.

North Korea’s nuclear test and missile launches have made our society appear even more chaotic. Can we not find the meaning of unity from the sight of the late President Roh from behind?

Are we not wise or circumspect enough to be able to do that?