Powerful punches but no killer blow

Powerful punches but no killer blow 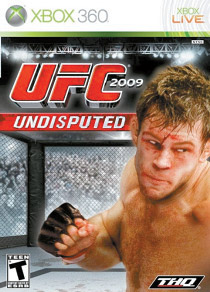 Other than the fighter bracing the cover and a few shortcomings, “UFC - Undisputed” is a surprisingly entertaining game.

A new breed of sport like Mixed Martial Arts (MMA), which combines various grappling and striking techniques, is not easy to reproduce as a video game. It’s just not easy to devise a formula for giving gamers solid control over the various take down and grappling moves of jujitsu and judo that have become a mainstay of MMA fighting.

Game maker THQ has made a nice attempt with its latest title. The graphics are outstanding and the movements look natural.

The lengthy tutorial is one way to familiarize yourself with the game and the manual offers about four pages on various moves that can be carried out using the analogue stick and trigger button. The controls take some time getting used to, but are manageable after the tutorial and a number of fights.

Employing a powerful punch from the likes of Chuck “the Iceman” Lidell or Quinton “Rampage” Jackson, you can suddenly knock your opponent to the mat and then rush to pound on the stunned fighter. Arm or leg locks and triangle or guillotine chokes can also be used, which are pretty effective.

However, the first drawback is the lack of impact felt during the fight. Take, for example, the Fight Night series. Whenever a haymaker or damaging punch is delivered, the impact of the punch on the opponent’s face is captured in slow motion with some gruesome sound effects. UFC lacks such details and the weight of the punches is simply not convincing enough.

Another drawback is the contrasting level of complexity in the game menu mode. While the option of choosing from 80 of the most recognizable fighters from five weight classes in the UFC is nice, there aren’t enough options. There are three basic fighting modes: an exhibition mode, a classic fights mode and a career mode. But this gamer could not help but think it would be nice to be able to start a customized tournament or competition of some sort.

The career mode lets players create and customize every aspect of their fighter, but the exhibition mode roster is off limits and players must make do with a create-your-own fighter. There is also far too much management required in this mode. Gamers have to go through seven to nine training or sparring sessions. Then they have to allocate newly earned points and wade through a bunch of e-mails

The verdict: UFC - Undisputed has excellent graphics and better than average game play, but it fails on the small stuff. If you’re an MMA fan, it might be worth a purchase but the overall package can’t deliver a power knockout.

Rating: ★★: Rent it, borrow it, but don't add it to your collection.