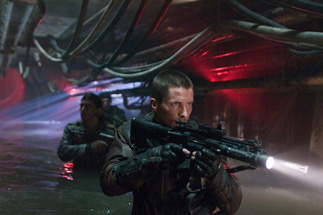 Christian Bale takes over the role of John Connor, the “last hope of humanity,” in “Terminator: Salvation.” [CineSeoul]

In elementary school I was surrounded by quotes from “Terminator 2.” And with good reason. The film is even now fantastic, the deadpan delivery by its enormous Austrian bodybuilder enough to make up for any number of annoying child actors.

Even in “Terminator 3,” Arnold’s quips (“we are going to need a new vehicle”) made the first half almost bearable.

So what of “Terminator Salvation,” the first film in the franchise made without the participation of now-governator Schwarzenegger (unless you count a CGI cameo of his facial muscles, which I don’t)?

John Connor has grown from tech-savvy tween with silly hair, and then from mouthbreathing, self-pitying teenager with silly facial hair, into, at last, burly resistance fighter with next to no hair and Christian Bale’s gravelly Batman voice. It’s 2018, the machines have taken over; pockets of humans hold out, listening to Connor’s voice on the radio and fighting for survival.

But he isn’t quite the confident “leader of the Resistance” we were promised. First, he isn’t leader of the Resistance - he’s a whiny rebel with a huge sense of entitlement. (I suppose that’s how you turn out when robots keep coming back in time just to tell you how important you are.) Here, Connor is just a low-level lieutenant. By the end it becomes clear that he’s being set up to assume the top spot in the next sequel, but that leaves one feeling one hasn’t accomplished much by seeing this outing - aside from helping to fund the next one. (To make matters worse, the Skynet core destroyed here turns out to be just one of many.)

Meanwhile, the plot - which has to do with Connor saving his teenaged future-father Kyle Reese (Anton Yelchin) from Skynet with the help of a sleeper-replicant rogue cyborg named Marcus (Sam Worthington) - is as full of holes as the countless corpses the terminators mow down. Characters switch allegiances on a dime, with the wooden dialogue providing precious little explanation.

Even worse, the technology is so inconsistent this barely qualifies as science fiction. At first a minefield is so dangerous one can’t walk through it without being crippled, but later the same characters zig-zag all over it to make their escape. Where a single terminator was enough to keep the entire cast on the run in past films, here all it takes is a stab in the neck or a strategically placed boombox. And though it’s presumably been just over a decade since the nuclear apocalypse of Judgement Day, it seems the fallout has disappeared into thin air - no one mentions radioactivity, not once.

Salvation also has some of the weirdest product placement ever, with raiders camping in a bombed-out 7-Eleven and John using a Sony Vaio to break into Skynet HQ. These ads are as transparently crass as the story is predictable.

The horribly contrived ending involves a living heart transplant and all the corny voiceover that implies. In fact it’s this film itself that needs emergency cardiac surgery. Yes, some of the special effects are impressive. But if the only survivors are these “gritty” cardboard cutouts, it seems the machines have already won. The animating spark - in short, the humanity - of this franchise is gone.