A woman feeds a horse at a local riding school.

Her favorite day is Friday. That’s when Yang Yu-jin, a fourth-grader at Jamdong Elementary School, Songpa District, Seoul, can ride Azalea in her school playground.

“I want to ride as long as I can,” she says, patting the flanks of her mount. Yu-jin belongs to Korea Youngster’s Horse Riding Club, which specializes in lessons for elementary school children at their own schools.

She’s one of a growing number of enthusiasts here taking up a leisure activity usually associated with wealthier classes. But with families enjoying higher levels of income, horse riding is gaining popularity.

A sport for the wealthy?

There is an interesting correlation between annual salaries and leisure pursuits. When average annual income rises above $15,000, golf becomes a popular sport. What happens when it exceeds $20,000? Horseback riding. The perfect illustration is Japan where the number of riders jumped 89 percent in one year in 1989 when average income levels rose above $20,000.

“More and more people are saddling up now they have a bit of extra cash to spend,” said Kim Hyeong-tae, of the horseback riding promotion team under the Korean Racing Authority.

The government is supportive of the new leisure pursuit. The Korean Racing Authority, the Ministry for Food, Agriculture, Forestry and Fisheries and some local governments are joining together to build more riding schools.

According to the KRA, 12 have been built or are in the pipeline. “People are more familiar with horse racing than horse riding but we intend to change that,” Kim said.

The KRA also plans to increase the number of riders from 20,000 to 50,000 by 2012. For that purpose, the government drastically eased rules on building riding schools and provided construction subsidies. The KRA aims to generate 2.6 trillion won ($2 billion) in sales per year and create 300,000 jobs.

“But the horseback riding industry is not very profitable so we, as a public corporation, decided to intervene,” Kim said.

According to the plan, the number of horseback riding centers is going to more than double to 500 in the country by 2012. There are currently fewer than 200 such centers.

Related laws already have been amended and schools have lowered riding fees. It costs 20,000 won for a single riding session at the school on Mount Unju, North Gyeongsang.


Man’s best friend is his mount

Interest in horseback riding is not new on the Korean Peninsula. In fact, horses are very much part of this country’s heritage. 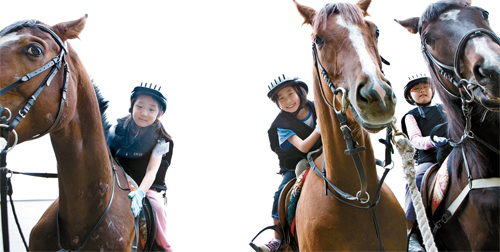 Horse milk was used as anti-fever medicine and manure was used for heating. The Joseon royals (1392?1910) used to eat horse meat. And there are still many traffic centers called maljukgeori, which means streets where horses are fed.

Of course, horses were also used for transport and during the Three Kingdoms period (57 B.C. to 668 A.D.). A breed called gwahama was exported to China. The name means a horse one can ride under a fruit tree. However, horses lost their position over time and they became hard to find except in places like the pasturelands on Jeju Island or horse racing parks. Riding became a sport for the rich and eating horse meat was considered disgraceful.


Saddle up for work

Despite all that, there are efforts to bring horses closer to our lives. The starting point is the free trade agreement signed between Korea and the United States. Observers say Korean farmers, especially livestock farmers, will be hit hardest if the FTA is eventually ratified.

So the government came up with promoting riding in the belief that it might revive tourism in rural areas. That’s why the central and local governments are gearing up together to promote horseback riding.

Professionals say horseback riding can create a lot of jobs. In Germany, which has the biggest industry in the world, over 300,000 people are employed, three jobs for every horse. Germany’s horse-related industry generates $6.3 billion in sales a year.

Riding is also in line with the Green New Deal of the Lee Myung-bak administration. The biggest related project is the revitalization of the four major rivers. Riversides can be an ideal riding location. In addition, horses are eco-friendly. Their manure can be used as fertilizer and their diet is basically grass.

Horses are usually easy to tame; there’s a common belief among horse people that horses choose people and are not actually tamed. In terms of evolution, there’s a theory that horses chose to live with humans rather than risk life among predators in the wild. Some say people don’t ride on the back of horses; rather, horses let people ride on their back.

Horseback riding is an art of communication between horse and human, which is why it’s a sport recommended for children who learn to understand others as they guide the animal. And it has health benefits. Riding is a thorough workout for the whole body for rider and horse. It’s especially good for the rider’s lower back and thighs, even though the rider is not actually running or walking.

Want to ride? Here’s where you can

This center has one big advantage over other horseback riding schools: It only takes 40 minutes from downtown Seoul City.

Youeal is a resort town, complete with bungalows around an artificial lake, and more than 600,000 people come here every year. Tamra Group, which raises 600 horses in Jeju Island, acquired this resort three years ago.

The center keeps 45 horses but if there are more visitors than expected, the company can readily ship more horses from the island. There are also six ponies for children. It costs 320,000 won ($254) to ride for three hours each Saturday for a month. For adults, it costs 650,000 won for 10 sessions over two months. The fee covers riding lessons.

The horseback riding school at Mount Unju is the first run by a local government. It opened on April 27. As Yeongcheon City covered 3 billion won out of the total construction cost of 4.7 billion won, riding costs here are much lower than at other facilities. Unlimited horseback riding is 300,000 won a month. It costs 180,000 won for 10 sessions of riding. This is one-third the fees charged in the Seoul metropolitan area.

The area where the course now stands used to be a forest. The 3.5-kilometer (2.2- mile) trail in the mountain is the longest in the country.

Seven bungalows just opened but there are few restaurants around the place. Nearby residents serve noodles for lunch.

There are 33 horses. Other local governments are sending delegates here to benchmark how to run a horseback riding course.

This club offers riding lessons as an extracurricular class for 10 primary schools in Seoul. A corner of an elementary schoolyard becomes a horse riding course once every week, when five horses arrive at each of the 10 schools.

Lessons last 30 minutes each session and the program runs for 40 weeks. Around 40 students participate in this class. After the 40-week course, children can take lessons in show jumping.

Once a month, the students ride the streets near their school. All they need to prepare for the ride are long pants, leather sneakers and gloves.

The Imjado Riding Center, located along Daegwang Beach, is the only course in Korea where you can go riding along the seashore. The sand is very fine but solid enough that if you fall, it won’t do any lasting damage.

Riding began here in July 2007 when South Jeolla and Sinan County changed related regulations to promote the sport. There are 13 horses at the center. It costs 150,000 won to start from scratch.

The two-day course includes meals. Only those who pass the test at the training course can go to the beach to ride. Last year, it held its first horseback riding competition on the beach.