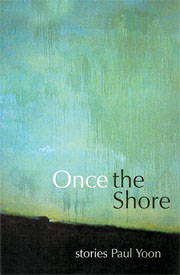 Years had passed since his last visit, and memories of his motherland were vague and fading. But somehow author Paul Yoon’s mind kept gravitating toward the myriad islets scattered off South Korea’s eastern tip. The location soon worked its way into his work as the setting of his debut collection of short stories.

“I thought a great deal about Jeju Island and other islands in the area when I first began the book,” the 29-year-old author said in a recent interview with Yonhap, explaining the fictional South Korean island of “Solla” in his book. “But I hadn’t visited Jeju in a long time, so I read a little about that area and relied on my imagination.”

Despite the “little research,” as Yoon calls it, his Solla Island is utterly convincing, so persuasive are his writing and power of imagination. In “Once the Shore,” a recently published collection of eight interlinking stories, the New York-born Korean-American author creates a visceral portrait of aching souls, each suffering separation and loss in the isolated and mysterious islets.

“I didn’t want to be hindered by too many facts,” he said. “I wanted my imagination to go wherever it wanted without stumbling upon a roadblock that would hinder the story.” 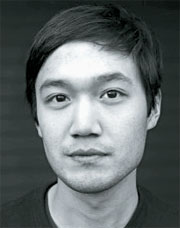 The isolated setting, Yoon said, gave his stories an effect similar to that in theaters and plays.

“I like how the stage is physically limited in terms of movement and what an audience can literally see, but can completely obliterate those boundaries,” he said. “An island would be an interesting way to explore that concept, to have these stories and characters be surrounded by a vast ocean, both literally and metaphorically.”

Yoon’s collection opens with the title story “Once the Shore,” chosen for the Best American Short Stories 2006 anthology. Arriving at a resort on the remote Solla Island, an American widow becomes companions with a young waiter, who has recently lost his beloved older brother. Slow and subtle, the two lonesome hearts seek a desperate closure with their missing loved ones through the friendship.

“I wanted to write about loss and separation because of the two wars - the Second World War and the Korean War - that are in the background of these stories,” Yoon said. “All the characters in these stories are linked to someone who was taken away by those wars. I wanted the unity that binds the characters together, some attempt at comfort.”

Seven other stories make up “Once the Shore,” Yoon’s first book.

“These days it feels like I have always been devoted to writing and reading, but I probably started writing seriously about seven or eight years ago,” Yoon said. “There was nothing else that mattered to me more than participating in the ongoing dialogue that occurs in so many places, every day, when one reads a book, thinks about that book, learns from it.”

Though he has written mostly short fiction rather than novels, Yoon said he doesn’t “see the real difference” between the two.

“They are all stories to me and it’s difficult to compare and contrast the two. It’s like studying paintings solely by the size of their canvases,” he said. “As for this particular book, I wanted to tell a multitude of stories within a single place, and so a collection of individual stories seemed the most natural thing to do.”

Born in New York and having lived in the area most of his life, Yoon hasn’t visited Korea in over a decade. But the author said he still had childhood memories that he cherishes and is often inspired by.

“I remember being obsessed with marbles and those big tops you spun - playing with them everywhere in every street and alley,” he said. “I am looking forward to visiting again one day, learning from it and seeing all the places anew.”

Naming Michael Ondaatje, John Berger, Alistair MacLeod and Kazuo Ishiguro among his many literary influences, Yoon said he has always “felt more comfortable spending time with a book than with people.”

“To be honest, I don’t know if becoming an author was a dream of mine, meaning I don’t know if I specifically said to myself one day that I want to be a writer,” he said. “I always loved reading books and I wanted to participate in that reading culture somehow.” Yonhap