Love for all life, even if it’s not so ‘warm and fuzzy’

Love for all life, even if it’s not so ‘warm and fuzzy’ 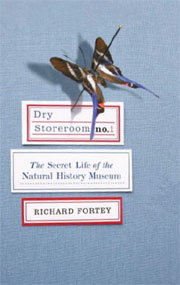 They say write what you know. Richard Fortey has certainly done so with “Dry Storeroom No. 1: The Secret Life of the Natural History Museum” - based on the author’s experiences working at one for 36 years, beginning in 1970.

What we see in the exhibition rooms is apparently the very tip of the iceberg. Of course, when you think about it, there’s no way a 400 million piece collection could be on public display all at the same time. Hired as a researcher on trilobites, an extinct group of marine arthropods, author Richard Fortey explores the specimens and research labs behind the scenes with an innately curious nature.

Fortey shows how scientists conducting research collect samples of specimens, gather data on their characteristics and name them. While two humans can have the same name, two species cannot, so scientists often get creative and make up interesting names for new species.

For example, two varieties of lygaeid insect are named Dollichisme (Dolly-Kiss-Me) and Marichisme (Mary-Kiss-Me), while some beetles are named after political figures like George W. Bush, Donald Rumsfeld, and Dick Cheney.

The detailed assortment and recording that the museum requires has resulted in a few funny habits. For example, one taxonomist arranged by length all the pieces of string used to wrap his parcels.

When he retired, a box was found under the category “too short to use.” Another rather disturbing object was a collection of pubic hair, pinned to index cards - a sample from each of the women one curator had dated, neatly organized in alphabetical order, found after his death. The bureaucratic “caste” system at the museum depicted by the author is also interesting. The bathrooms were actually divided into “scientist” and “gentlemen” - not yet fully fledged researchers.

Each roll of toilet paper was labeled “for official business.” There was even a time when, before computers became widespread, people with sloppy or large handwriting were not allowed to work at the museum. Bad handwriting made it impossible to work with the small classification labels the museum used.

In another way, the museum was a haven for enthusiasts back then, before researchers were required to stress over numerical figures, thesis research or commercial viability.

The author writes about the history of the museum and stories related to taxonomy and systematology. The saddest stories have to do with scientists who dedicate their lives to finding and classifying a new species, only to have it go extinct before they are done.

This book emphasizes the importance of all life forms, including the ones that aren’t so “warm and fuzzy.”

Dry Storeroom No. 1: The Secret Life of the Natural History Museum