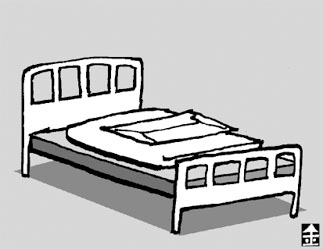 The classic movie “Citizen Kane” directed by Orson Welles is a mystery film in which viewers try to find out the meaning of the last word of media tycoon Charles Foster Kane: “Rosebud.”

Famous people’s last words have been objects of interest since the beginning of human history. Since Caesar said “Et tu, Brute?” many words that famous people left before dying have been circulated to teach us a lesson or simply to satisfy our curiosity.

A person’s last words hold a mirror up to the person’s life. Leonardo da Vinci was humble until the last moment, and worried that he should have left more and better works of art. Bing Crosby, an American popular singer who was a big fan of golf, did not listen to a doctor’s advice and played a round.

After the game, he said, “Well, it’s been a great game of golf, fellas,” and died of a heart attack. Before taking his own life, Vincent van Gogh wrote, “The sadness will last forever.”

Sometimes, we can understand a person’s attitude towards death from his last words. Marco Polo said regretfully, “I have not told half of what I saw.”

But Karl Marx showed no regret and said, “Last words are for fools who haven’t said enough” while they were alive.

Some people make jokes or give consolation to those who are left behind.

As Benjamin Franklin lay dying, his daughter suggested he lie on his side so that he could breathe more easily.

Her father said, “A dying man can do nothing easily,” and passed away.

On his deathbed, George Bernard Shaw said, “Dying is easy. Comedy is hard.”

Albert Einstein left a piece of paper behind when he died, and the words he wrote on it were “Citater fra.” These two words are now used as an example of the man’s attitude.

Great scientists, too, are afraid of death: Even Charles Darwin said he was afraid of dying.

Before he died, Sigmund Freud said, “This is absurd!”

Sometimes a person’s last words are fictionalized. Ludwig van Beethoven’s last words are said to be, “Applaud, my friends. The comedy is finished.” But whether he actually said those words or not is still a controversy.

Former President Roh Moo-hyun asked his bodyguard, “Do you have a cigarette?” before he took his life. But his more meaningful last words are in his will, which consisted of 14 lines.

The will was recited at his funeral service. What words did he want to be remembered for the most? He urged us to unite and wrote, “Do not blame anyone,” before he left us.

That is a truly respectful attitude.