A golf rush for desperate carmakers

A golf rush for desperate carmakers 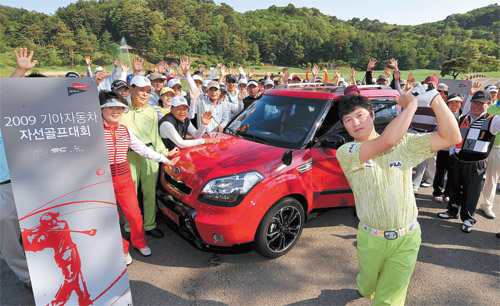 A participant hits a shot at Kia Motors’ charity golf tournament held May 25 for 140 owners of its Opirus sedan and Mohave SUV. [YONHAP]

Automobile marketing conjures up thoughts of TV commercials and print ads of gleaming machines gliding past sleek skyscrapers. But in this economic bust, local carmakers are turning to another promotional tool: golf.

Though not new, golf marketing in the past exclusively targeted high-end consumers. It is still the sport of choice for the luxury market.

But now the strategy is being tried on buyers with slightly smaller budgets, with Kia Motors, the No. 2 carmaker here, inviting 140 owners of its Opirus sedan and Mohave SUV to a charity tournament May 25.

Participants each received innerwear from Kolon Elord, with a set of irons from the Royal Collection for the winner. Golf lessons from a professional were provided at the event, along with a musical performance.

The company held its first “screen golf” championship on May 16 to promote its latest SUV, the Sorento R. The electronic golf game is growing in popularity as a cheaper alternative to heading out on the greens. Twenty finalists competed at a screen golf center in Dogok, southern Seoul, after four weeks of preliminaries across the country. Kia gave a new Sorento R to the winner, and a free golfing trip to Jeju Island for the runner-up.

Kia even invited 60 owners of the previous Sorento model to Jeju to test drive the new version for three full days.

The event also included pottery making and a musical performance.

The Equus will make its official debut overseas in the second half of this year.

Toyota Korea holds golf tournaments twice every year; once in spring and once in fall. At each, a female pro golfer gives out free lessons.

Volvo Korea on May 18 held an amateur golf tournament at a club in Gyeonggi, with the winner given the chance to participate in Volvo’s global tournament, to be held in Spain from Sept. 25 to 30.

The company said it hoped its VIP marketing would help establish a stronger relationship between the company and Volvo owners.

With demand lagging, companies are turning to culture and even financial services to appeal to consumers.

Hyundai invited 100 couples who own its Genesis sedan to an international music festival at the Seoul Arts Center, southern Seoul, as part of a membership program for Genesis owners.