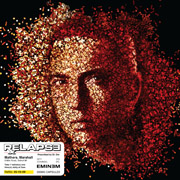 A drug-addicted mother, chainsaws, Britney Spears, toilet humor and Elvis Presley: Welcome back to sometime around 2001 - or Eminem’s version of those heady days at the turn of the century when a little white rapper took the world by storm.

Yes, Shady’s back. Back again. And very little has changed it seems - just that the world has probably moved on. Not that Eminem has ever cared what people think or feels any urge to change. “I know you’re probably tired of hearing ’bout my mom,” he raps, while banging on that drum on every track.

Despite the disappointment of a rather underwhelming comeback, however, his undeniable rapping skills are still on display. The talent to rhyme “Ted Bundy” with “red panties” should not be discounted lightly. And “Relapse” is not without its pearls of wisdom. So the next time your stepfather is abusing you while your mom is poking you with a cigarette butt to see if you’re still alive as she eats Valium spinach, it’s comforting to ask yourself, as Em does, “What would Elvis do?” which is sure to enlighten your way. By Cam Graham