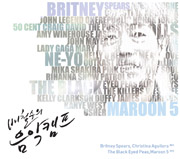 Any compilation set containing a Michael Bolton song should be torched. Except possibly this one, although that’s still a bit questionable.

“Bae Cheol-soo Music Camp,” celebrating the 20th anniversary of the popular MBC Radio show and its well-known host, does indeed include a gag-inducing Bolton title (“How Am I Supposed to Live Without You?”). It also features stomach-churning yesteryear hits such as Cyndi Lauper’s “Time After Time” and Foreigner’s “I Want To Know What Love Is.”

But that’s half the fun of this two-CD set, which spans two decades of popular music and includes everything from power rock ballads to rap hits, all selected by Bae himself.

It probably isn’t the music you’ll jam to while cruising around in your car. It is, however, perfect for parties, as it’s sure to spark some interesting conversations and group sing-alongs. More recent hits in the set include songs by 50 Cent, Snow Patrol, Oasis and the Killers. By Chris Walsh