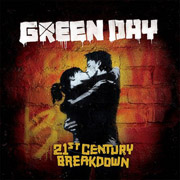 Green Day has come a long way since their breakthrough album “Dookie” back in 1994.

That was when the group first hit it big, and their next real hit album, “American Idiot,” came a decade later.

Their latest and their first release in over two years, “21st Century Breakdown” tells the story of a couple - Gloria and Christian - broken down into three parts: “Heroes and Cons,” “Charlatans and Saints” and “Horseshoes and Handgrenades.”

The dark lyrics seethe with discontent about society, politics and broken promises. Take for instance a bit from the title track:

“My name is no one. The long lost son. Born on the 4th of July. Raised in an era of heroes and cons that left me for dead or alive.”

While I don’t think I would have liked the group’s latest work if I had listened to them in the past, the overall package contains a good mix of punk rock and soft ballads.