Peas punch back with fifth album

Peas punch back with fifth album 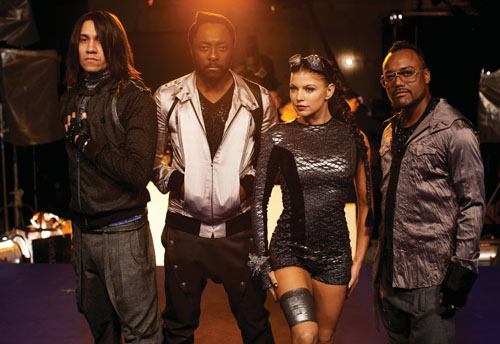 The Black Eyed Peas will release its fifth studio album next week. Provided by the promoter

The Black Eyed Peas believes that “the energy never dies,” which explains the title of their new album, “The E.N.D.” Judging from how fans obsessively embraced previous Peas’ hits like “My Humps,” “Don’t Phunk with My Heart,” “Let’s Get It Started” and “Where is the Love?,” the music world certainly hopes so.

The Black Eyed Peas releases its fifth studio album on June 9. The album’s lead single, “Boom Boom Pow,” which came out in February, has already hit the No. 1 spot on the Billboard Hot 100 singles chart, becoming the band’s first song to top the chart.

Boom Boom Pow is an energetic dance-pop and hip-hop song in line with the Peas’ signature style.

In an interview with the JoongAng Daily, the band says it hopes the album’s hard beats won’t stop people from going out and having fun Peas-style.


Q. It took four years for your latest album The E.N.D. to come out following the release of your previous studio album “Monkey Business.” What took so long and how does The E.N.D. differ from your previous albums?

A. We’ve been doing a lot of stuff such as touring: It took one and a half years of touring, campaigning, movies, Fergie’s solo album, Will.i.am’s solo album and a bunch of stuff.

The E.N.D. is more like going out - going out to clubs and having fun. The beats are heavier. We tried to compete with what’s going on now so the album became trendier and it’s full of electronic music.


Boom Boom Pow is already topping the charts. What was the inspiration for the song? As the producers of that song, how do you want people to listen to it?

The inspiration comes from going out, going out to clubs every day, and trying to keep up with this guy [Apl.de.ap], spreading some electro music. That’s the whole energy and drive.

We hope people like the song and the song will really make people want to go out and have some fun. I can’t wait to go to clubs and hear it. And I can’t wait for people to know it.


It’s been more than a decade since your debut album. How has the band evolved over the years?

I think we’ve evolved as song writers, producers, performers and just as people in general. We keep inspiring each other, too. Also, travelling all over the world has made us what we are now, seeing different cultures, peoples and genres. We are not just caught up in this bubble.


Monkey Business was such a success, selling over 9 million copies and clinching two Grammy Awards. Was there any pressure to keep up with that level?

Not really. [It was] just fun. But the pressure was to make beats hard enough for clubs, not to keep up with the same level of success in the last album.