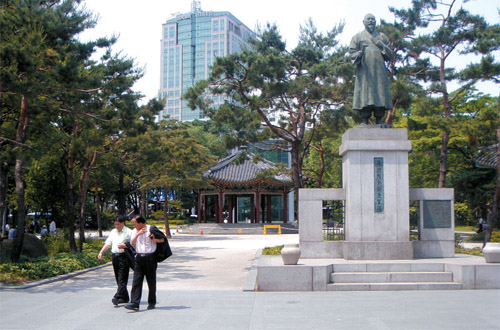 Tapgol Park’s new measures to restrict the number of visitors for preservation purposes have significantly reduced the number of elderly visitors. By Kim Hyung-eun

Is it a historic site to be preserved or a park for everyone to use? More importantly, is it possible to be both?

This is the question that has caught Tapgol Park and its regulars, most of them senior citizens, and its operators, Jongno District Office and the Cultural Heritage Administration in a years-long dilemma.

“I come here everyday,” said Han Ga-heung, 86. “All my friends are dead. I live by myself. Coming here and meeting people is my only task of the day.”

Han is just one of dozens of senior citizens who make their way to the park every day. But the park rules have grown more restrictive than ever in recent years. Signs posted last October at several spots in the park say that “visitors should be here for no longer than an hour, and they cannot sit on the ground, play baduk (an ancient Korean board game), hold gatherings, or do anything that does not befit the park.”

Han and two other men I talked to were indignant about the changes. But the operators may also have a point.

“This is a historic site as well as holy ground for the descendants of the freedom fighters,” said a Jongno District Office official who refused to be named. “We cannot help but think about how it’s being preserved as well as how it looks to tourists.” The park is Korea’s Historic Site No. 354.

But there’s a question how well the new rules are being observed. The official admits she cannot control the amount of time elderly citizens spend in the park.

Moreover, on my recent visit, people were sitting on the well excavated in 2001 by an archeologist during a renovation. The well is assumed to have been built during the Joseon Dynasty, sometime after 1512. Another man was sitting idly on the stone pedestal that used to hold the sundial from the early Joseon period.

Meanwhile, the fury of the senior citizens has grown. The octagonal building at the center, where they used to enjoy the shade and take naps, is off limits as of two weeks ago.

The Jongno District Office official said it was because parts of the roof had fallen and posed a danger, but she added that it was uncertain when it would be restored and, when restoration is completed, whether or not it will reopen to visitors.