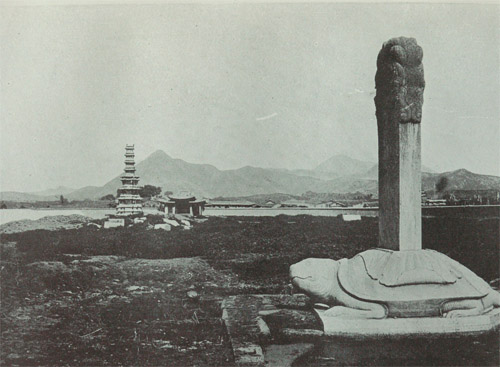 The photo captures a moment in the late 19th century when Korea was clearing land for its first modern park. With Mount Bugak in the background, two relics from an ancient Buddhist temple stand out. These items, treasured by Koreans, can still be found in the park today.

It’s not New York’s Central Park or Hyde Park in London. In fact, it’s anything but the sort of park where lovers might go for an intimate picnic, nor is it a place where families on an afternoon outing might go for exercise.

Tapgol Park, also known as Pagoda Park, in Jongno, central Seoul, is today not much more than a watering hole for the elderly and pigeons. An official at the Jongno District Office who oversees management of the park estimates that 80 to 90 percent of people who use the park are senior citizens. On this reporter’s recent visit one sizzling spring afternoon, elderly gentlemen wearing hats and carrying canes arrived one after another, gathering in small groups under the shade of trees and spending their time chatting about current events.

The site, which has witnessed so much history though not many Koreans today realize it, has undergone a remarkable transformation. Only historical records and, of course, old photographs, remain to tell the story, which dates back as far as the Goryeo Dynasty (918-1392).

The first structure that history can place on the site is Heungbok Temple, built during the Goryeo period.

The temple had its ups and downs, as Buddhism’s influence ebbed and flowed as power changed hands. “Seoul Cultural Properties,” published in 2003 by the Seoul Metropolitan Government, noted that in the beginning of the Joseon Dynasty, the temple was home to the Jogye Order of Buddhism. But with increased state repression of the religion, it came into later use as a state-owned field.

King Sejo (1417-1468), the seventh king of Joseon, turned things around again. According to the Annals of the Joseon Dynasty, the king ordered the temple restored and renamed it Wongak Temple.

“[The officials] discussed the blue tiles that would be used on the roof of the temple. The cost was high because there was a need for 80,000 of them,” read another record a week later.

But according to Seoul Cultural Properties, with further repression of Buddhism in 1504, the temple was taken over again and used by Jangakwon, the government organization that manages royal performers. A decade later the structures in the temple were used for other public facilities.

In its heyday, the temple had a number of precious structures. But two really stood out. As in the photo above, right, the huge white tablet on the right foreground occupies a commanding place in the area.

Built in 1471, the 5-meter- (16.4-foot-) high monument is made of granite and marble and features a turtle-shaped base and a dragon-shaped top.

The tablet must really have caught the attention of foreign visitors because numerous books written by foreign authors contain pictures of it. The captions indicate that the tablet triggered their imaginations, with titles ranging from “The Sleeping Guardian of Seoul,” to “Old Tomb of a High Official” and “A Memorial Tablet with the Legendary Turtle Base.” 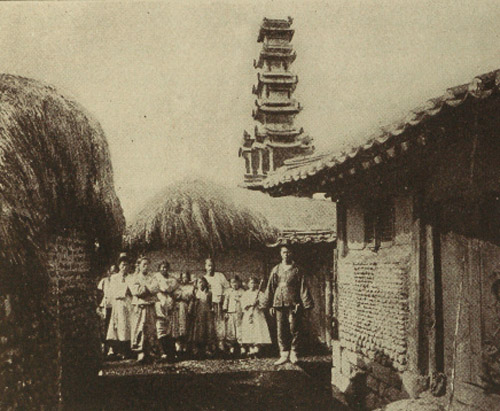 The photo shows the houses that were built on the site after the temple was demolished in the mid-Joseon era. Provided by Myongji University-LG Yeonam library

Since then, a pavilion has been built to house the tablet for better preservation. The tablet is designated Korea’s Treasure No. 3.

Another signature structure in the temple was the 10-story stone pagoda, which is pictured on the left background. It gave the present-day park its name. The 12-meter-high stone pagoda is made of marble and decorated in a refined, ornate fashion, and was completed in 1467.

As the pagoda is centuries old and exposed to wind and rain, the Korean government set up a glass structure to protect it. It is Korea’s National Treasure No. 2.

The picture is from French archeologist Emile Bourdaret’s 1904 book, “En Coree.” Bourdaret, who came to Korea to supervise railway construction, disappeared several years after writing it.

King Gojong (1852-1919) of the Joseon Dynasty ordered John McLeavy Brown to plan Seoul’s first Western-style park. Brown (1835-1926), who was from Ireland, served as a financial adviser to Gojong and Chief Commissioner of Customs.

The mountain in the photo, above right, is Mount Bugak. “This photo must have been taken after the temple was torn down, when the site was being cleared for the park’s construction,” said Ahn Changmo, an architectural history professor at Kyonggi University. The plan for the park involved clearing the houses that crowded the area as centuries had passed since the temple was torn down. After the workers cleared the area, they set up fences, planted trees and installed benches. The park was completed in 1897. But the biggest change was the octagonal pavilion built in the middle.

Most Koreans know the pavilion as the spot where Korea’s independence fighters read the Declaration of Independence on March 1, 1919, which signified the start of the national independence movement against Japanese colonization (1910-1945).

That is why Tapgol Park also houses memorial tablets, copperplate engravings and statues commemorating the movement.