Food for thought for a desolate land

Food for thought for a desolate land 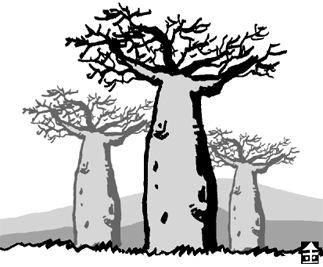 On the tiny planet where the Little Prince came from, baobab trees were a bane and a menace.

On a tiny planet where you can watch the sun set forty-four times, just by shifting your chair a little, one or two thick and tall baobab trees as big as castles would be disastrous.

That’s why weeding out the bad plants every morning before they spread is a discipline as important to this planet as doing one’s ablutions when you wake up.

Baobab trees on planet Earth, however, are a precious source of food, water, shelter and medicine to the African people. The abundant green leaves provide valuable shade and the stems can be used for ropes and fishing lines. The huge trunks soak up and store water during the rainy season, serving as a water reservoir during the long dry season.

The trees’ most valuable assets are nutrient-rich leaves and fruit. The fruits, dried and made into white powder, can be used in soup and stored for many years, helping to keep many people alive in a land besieged by droughts and wars.

It has only been recently that scientists recognized the nutritional value of the tree. Its fruit contains six times more vitamin C than oranges and the calcium content is twice that of cow’s milk. It is also rich in vitamin A, B and iron and its seeds are brimming with protein.

Baobabs are truly a godsend in a land of desolation and dearth.

Out of 5 million children dying of undernourishment every year, the great majority can be found on the African continent.

Food is scarce and nutritious food even more rare. Grain makes up most of the food donations from Western countries, leaving a famished population lacking in vitamins, minerals and protein.

A baobab tree for every home could solve many problems.

But baobab trees can only grow in suitable conditions, restricted to hot, dry tropical habitats. Trees need to mature at least 10 years to bear fruit. But still many countries have succeeded in grafting and implanting to grow orchards of the succulent trees on their lands. Fruit pulp is shipped to Europe, adding cash to the trees’ rich line of resources.

Unlike Africa, another famine-stricken region - North Korea - remains a source of bleak news. Food shortages have been aggravated now that food aid has been cut off as the country further isolates itself with a series of nuclear and military threats.

One report says more than half of its youths are malnourished.

If only the leaders would spend their resources in planting apple trees, if not baobab trees, to feed their people instead of firing nuclear devices and missiles.