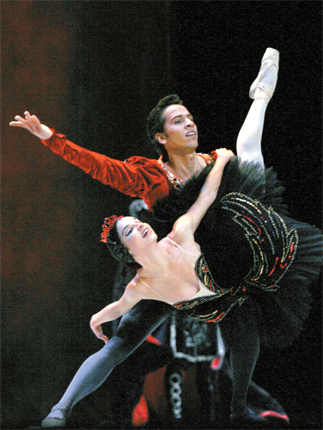 Cuban ballerina Viengsay Valdes and her partner Elier Bourzac perform in a scene from “Don Quixote.” Provided by the organizer

Even if you don’t know a toe shoe from a ballet slipper, the 2009 World Ballet Star Festival promises to introduce ballet novices and balletomanes alike to the world-famous dancers set to perform in Seoul this week.

The performance includes highlights from well-known ballets, including “The Nutcracker,” “Cinderella” and “Don Quixote.”

“Ballet novices will have a chance to see what ballet is like with performances of familiar classics. People who love ballet can see ballet stars on one stage without travelling around the world,” said Lee So-young, secretary at the Seoul-based World Dance Center.

The WDC collaborated with the JoongAng Ilbo to bring the festival to Seoul.

“It usually takes between three and four months to decide who will perform at the festival because all of the dancers have hectic schedules,” said Yoo Kyung-su, an official at JoongAng Culture Media.

The cast includes principal dancers from the Mariinsky Ballet, the National Ballet of Cuba and the Staatsballett Berlin.

When asked how someone who is unfamiliar with ballet and its stars can learn to appreciate the form, Lee replied, “In order to enjoy this kind of performance, which consists of highlights [from major ballets], people should focus on the dancers’ technique, not the stories. The dancers are here to show their skills.

“Researching the performers and their personal backgrounds might bring even more enjoyment,” she said.

Sadly, Russian ballet star Polina Semionova, who is popular with fans here, recently canceled her appearance following the death of her mother. But there are plenty of other stars to see.

Whitney Jensen has been dubbed the next big thing on the international ballet scene. The 17-year-old American won the Grand Prix at the International Ballet Competition Varna last year, one of only four dancers in its 44-year history to receive the honor. Jensen pairs up with Albert Davydov for two duets.

Cuban ballerina Viengsay Valdes performed the leading role of Kitri in Don Quixote at age 19 and received rave reviews from critics for her effortless balance and fast spins.

Two prima ballerinas will again be pitted against one another in a show of their skills. Kim Joo-won and Ekaterina Kondaurova were both named best female dancer at the 2006 Prix Benois de la Danse, a Russian competition whose past winners have included the likes of Mikhail Baryshnikov, Alessandra Ferri and Korea’s Sue Jin Kang. A single winner could not be chosen, leading to the first shared best female dancer award in the competition’s history. At this event, viewers can judge for themselves.