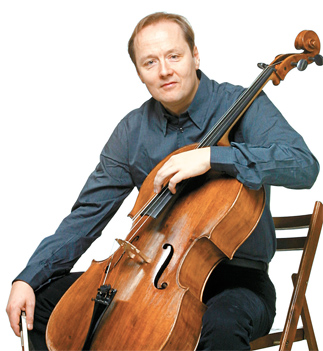 Martti Rousi will perform in Korea tomorrow. Provided by the organizer

Finnish cellist Martti Rousi defines classical music to be “a living, moving organism and part of nature.” At Rousi’s upcoming solo recital in Korea, people will get a taste of his personal interpretation.

Kumho Asiana Cultural Foundation has invited the world renowned cellist to bring to Korean soil the sentiments of Finland in the concert appropriately called “Finland & Finland.”

It will be the fourth in the foundation’s “World Master’s Series” this year, in which the organizer introduces existing masters in the classical world, and Rousi’s first Korea recital.

Rousi began playing the cello at 8, studying with masters like Arto Noras, Janos Starker and Natalia Gutman, among others. Since 1995 Martti Rousi has been professor of the cello at the Sibelius Academy in Helsinki.

For his Korean concert, Rousi has chosen a unique program that takes the audiences back to 1801, 1901 and 2001. The program will begin with Sibelius’ “Malinconia (1901),” which is imbued with sorrow reflecting that the composer wrote the piece while grieving his daughter who died of typhoid.

Also included are Beethoven’s seven variations on Mozart’s opera “The Magic Flute” from 1801 and Magnus Lindberg’s Partita from 2001.