Authentic Insa-dong hidden down the alleyways

Authentic Insa-dong hidden down the alleyways 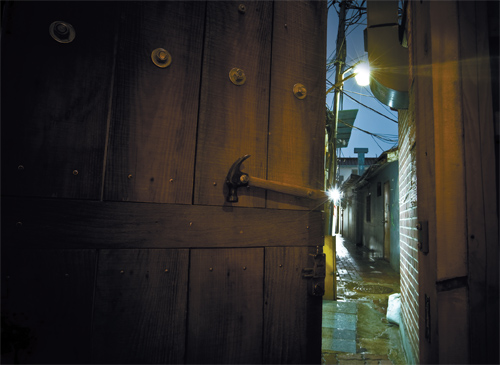 A back alley in Insa-dong, central Seoul.

Insa-dong is a well known tourist attraction in the center of the capital Seoul, attracting thousands of people during the week.

But some old hands say the cultural hub is not what it used to be. You’re more likely to find shoddy imported goods and fake antiques than genuine Korean goods these days, they say.

“Most souvenirs in Insa-dong, especially on the main street, come from China,” said Kim Keun-ja, 54, manager since 1991 of a teaware shop called Samhwaryong (Three Flowers on a Hill) in a hanok, or traditional house, far from Insa-dong’s main drag.

A stroll down the main thoroughfare confirms that very cheap products are indeed sold here. Fans and wooden masks can be bought for a couple of thousand won, or just one or two dollars.

“Vendors on the main road pay three or four times more rent than us,” Kim said. “They have no option but to import cheap goods to survive.” 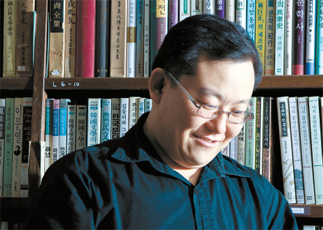 It’s not just the smaller souvenirs that are fake. High-priced antiques such as old paintings are also occasionally found to be counterfeit jobs.

In March last year, “Girl” by Kwon Ok-youn was purchased by a collector surnamed Hong for 18 million won ($14,385) from an Insa-dong gallery. It turned out to be fake, according to Seoul Auction.

The recent controversial movie “Insa-dong Scandal” relates the story of counterfeiters specializing in old Korean paintings. Gallery owners in Insa-dong were not amused and have tried to file a suit claiming that the film harms their reputation.

But not every Insa-dong alley is a treasure trove of deceit. Many store owners and collectors try to keep the authentic spirit alive but they have been forced off the main drag by high rents.

The shops don’t have big signs outside advertising their wares and they tend to rely on regulars rather than trying to attract new customers through heavy promotion.

Tongmungwan, for instance, has been dealing in old books since 1934, making it the oldest book shop in the area.

Unlike other stores in the neighborhood, its doors are always closed and the windows are blocked up with piles of old books and old paintings. This lack of visibility lends a mysterious air to the store and the curious can’t help but stop by and see what’s inside. 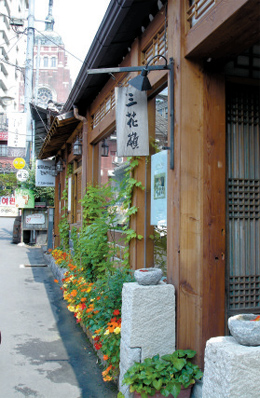 Samhwaryong, which sells teaware in Insa-dong.

“To be honest, I’m afraid of people coming in,” confessed the owner, Lee Jong-un, 40.

“Many of the books might get damaged if someone flicks through the pages. The books are very old,” Lee added. The store is closed Sundays, even though it is possibly the busiest day of the week for the other store owners.

Tongmungwan was founded by the late Lee Gyeom-ro, grandfather to Jong-un, and the book shop and its vast collection have been handed down the generations.

The late Lee was famous for collecting old books such as “Wolinseokbo,” a biography of Buddha published in 1459, and “Cheongguyoungeon,” a collection of sijo, Korean verses, from the late Goryeo Dynasty to 1728.

The shop’s current owner treasures its copies of the Shanghai Independent Newspaper the most, published by the exiled Korean provisional government during the campaign for independence against Japan.

Lee’s bookshop has a total of 170 editions of the newspaper including the inaugural issue, for which a private library in Japan has offered a huge sum. Lee said he turned down the offer because he thought the collection should belong in a Korean library.

Ahn Baek-sun, 76, who runs Dongyeheon selling old artworks, is also trying to retain a sense of the Insa-dong spirit. 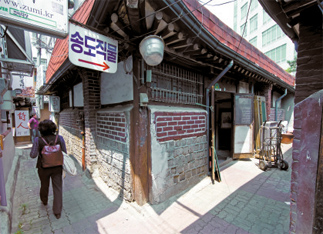 Ahn introduced an auction system in Insa-dong in June 2007 because so many people were concerned about the authenticity of the works at Insa-dong.

At first, the galleries opposed Ahn’s initiative. They didn’t like the idea of revealing the prices of old paintings to the public. But Ahn believed the system would bring transparency to the Insa-dong art scene.

“I think Korea is short of historical records, so I believe we are obliged to take good care of historic goods and leave them to next generations,” Ahn said.

When it comes to scroll-making, Jeongilpyogusa and Songdo Textile are renowned shops.

Kim Kwon-young, 71, has been operating the former for the past 55 years. Kim helped renovate a scroll of a Buddha drawing at Naksan Temple in Gangwon in March.

“No one wants to learn how to make scrolls and frame paintings these days. I’m worried if anyone will be around to restore worn-out scrolls in the future,” Kim said.

The calligraphy store Guhasanbang has also witnessed the ups and downs of Insa-dong since it opened in 1910. The shop stocks more than 2,000 items, so the 59-year-old store owner Hong Su-hee is always on hand to help visitors.

Among Insa-dong’s old shops, the 18-year-old tea shop Samhwaryong is relatively young, but the shop also tries to keep its identity.

“People who remember the good old days drop by for tea and to buy teaware,” said Kim Keun-ja, the owner of the shop.

“Insa-dong still has some authenticity because there are people who stick to genuine Korean antiques.”


Insa-dong dates back to the Joseon Dynasty (1392-1910) when the government-based royal painting institute was located there.

Every year people who wanted to become painters flocked to the shops selling painting tools in this neighborhood.

The association with antiques grew during the Japanese colonial period (1910-1945).

Fallen yangban, or high-class gentry, sold off their old paintings, pottery and other items here. Many were broke and needed cash.

Few people back then had much of a concept of the importance of cultural properties. Goods tended to be priced by their cleanliness rather than their historic value.

After Korea won back its independence from Japan, Insa-dong was called Mary’s Alley by U.S. soldiers, though that name is hardly ever used today.

In the 1970s and 1980s, galleries catering to art students sprang up. Graduates needed the galleries to exhibit their paintings and sculptures.

Other businesses took root as well. Scroll-making shops and calligraphy tool shops settled here, making the neighborhood a place for craftsmen as well as for students.

Perhaps the factor that has contributed most to Insa-dong’s environment is the ban on cars in 1997.

The ban made the area attractive to all kinds of visitors, whether or not they are interested in art and Korean culture.