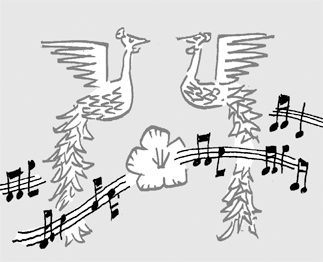 If the property rights act was as severe in the 1970s as it is today, who would have earned the most money from royalties in Korea? Surprisingly, the answer is not the most popular singers of the time like Lee Mi-ja or Na Hun-a, but rather the late President Park Chung Hee.

“Saemaul Norae,” or “The Song of a New Village” in English, was the theme song for the Saemaul Movement. Written by Park himself, the song blared across the nation day and night, exhorting the people to work hard to modernize the country. “Thatched-roof houses will be gone and roads into villages will be widened,” the song went.

Park’s favorite song, however, was “Dongbaek Agassi,” or the “Camellia Girl.” In 1979, former Japanese Prime Minister Takeo Fukuda visited Korea and dined with Park at the Blue House. The song’s singer, Lee Mi-ja, was called in to perform.

The president enjoyed the song in private, but it remained banned from the public until 1987. The reasoning behind the leader’s banning of the song has been said to have been because it was sung in a Japanese enka style. Others suggest the song was barred because such a sentimental song would have a negative effect on the diligent work ethic of people striving hard for economic development.

The third song that is commonly associated with Park is “Gue Ddae Gue Saram” or “The Man at that Time” by Shim Su-bong, the singer who was present at the scene when the former president was killed.

During his time in the Blue House, former President Roh Moo-hyun also sang a song that was once banned. In the spring of 2004, after winning a crushing victory in the general elections after the impeachment crisis, he had dinner with his party members and sang “Nimeul Wihan Haengjingok” or “The March for the Right One.” The fact that this most representative song of the democracy movement, written to pay respect to the victims of the massacre in Gwangju in 1980, was sung at the Blue House, not on the streets fogged by tear gas, symbolized a changing of the times.

“Sangnoksu,” or “The Evergreen Tree,” was played at the funeral ceremony for former President Roh and has become quite symbolic. This is probably because the lyrics remind us of the deceased leader’s personal and political life. He constantly overcame obstacles and difficulties and kept moving ahead, without losing his conviction.

One wonders what song the public will associate with President Lee Myung-bak.