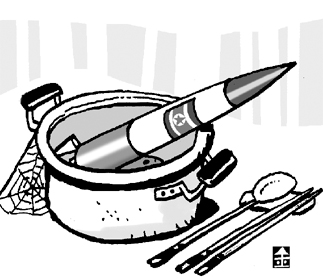 Back in the 1980s when Korea was under stringent military rule, a joke about the head of the state made the rounds. The ruler, when told by his aide that people were starving due to lack of rice, scoffed, “No rice? What’s the problem? Why can’t they just eat ramen instead?”

Another anecdote illustrating the callousness of people in power comes from the days of the French Revolution. King Louis XVI’s frivolous, decadent wife Marie-Antoinette, who was hanged in 1793 as a symbol of the French regaining their liberty from the corrupt political system, is notoriously associated with the comment, “Let them eat cake,” supposedly uttered upon hearing that people had no wheat, and as a consequence, no bread.

Historians later clarified that the comment was not made by her, but was used to augment the corruption and decadence of the monarchy and aristocracy of the time.

But foolish and ignorant leaders invariably create suffering for their people. Emperor Hui, the second ruler of the Jin Dynasty, ranks first in ancient Chinese history for incompetence. Despite his limited intelligence, Hui nevertheless succeeded the crown by relying on his father’s favor. At that time, people were suffering all over the country from famine due to poor crop yields. After the king heard of the dire situation, he innocently asked, “If there is no rice, why don’t they cook beef stew?” Not surprisingly the king was later toppled by his granduncle.

A prince during the Qi Dynasty, while out strolling one cold winter’s day, remarked that he wasn’t feeling cold even though everybody was saying it was cold. A wise politician standing nearby pointed out that a virtuous leader would look around and ask whether others were hungry when he felt full in the stomach, trying to indicate the insensitive attitude of the leader.

Chinese poet Du Fu lamented, “The doorsteps of the rich stink with the smell of liquor and rotten meat while on the streets outside lie the bones of peasants frozen to death.”

The Kim Jong-il version would perhaps sound like this, “What’s wrong with going hungry? We are a nuclear state.”

While the tension heightens at the expense of its suffering people, North Korea is poised to carry out an unprecedented three-generation hereditary power succession for the Kim family dynasty.

The three-generation height of this dynasty casts a dark cloud over the famished North Korean people. It is a tragedy to witness such suffering inflicted on people living on the same rivers and soil as we do.