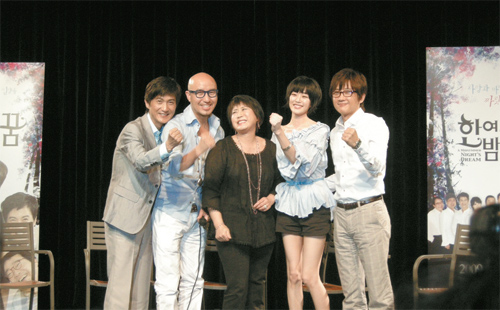 From left to right: Ahn Nae-sang, Hong Seok-cheon, Choi Hyung-in, Kim Hyo-jin and Choi Jin-young announce the revival of the 1995 production of “A Midsummer Night’s Dream” in Daehangno, Tuesday. By Park Sun-young

With the sun beating down and the days growing longer, it’s easy to get the sense that summer is drawing near. And what other season would be perfect for theatergoers to enjoy “A Midsummer Night’s Dream”?

The famous romantic comedy by William Shakespeare, which portrays the adventures of four young Athenian lovers and fairies in an enchanted forest, has been widely performed across the world with too many different versions to count. But the latest Korean version of the play, directed by Choi Hyung-in, a professor of theater and cinema at Hanyang University, seems justly special.

“We have reunited 14 years after our performance of this play in 1995,” Choi said in a press conference Tuesday at Hanyang Repertory Theater in Daehangno, a theater district in the north-central area of Seoul.

As the director noted, this version is a revival of her earlier production, which pulled off a coup at the Shakespeare Drama Festival hosted by Seoul Arts Center in 1995. The main cast, including actors Lee Moon-sik (as Bottom), Ahn Nae-sang (as Peter Quince) and Hong Seok-cheon (as Francis Flute), reprise their roles from 14 years ago.

Furthermore, the play can be fairly tagged as “made in Hanyang” because the majority of the cast are graduates in theater and cinema from Hanyang University, where they were taught by Choi, or actors trained at Hanyang Repertory, which she established in 1992.

Among the players, Lee and Ahn, who were novices in the theatrical world back then, have now grown to be recognized for their “real acting credentials.” Meanwhile, Hong is known more for his private life than his acting career as he came out of the closet in 2000 to become the first openly gay entertainer in Korea.

“What I can say definitely is that had it not been for Choi, I would not stand here as an actor. She is the one who made me come this far,” Ahn said, recalling the time when he was taught by Choi, who is said to often drive her students into Spartan training. Many famous actors count themselves among Choi’s disciples, including Sol Kyung-gu, who starred in movies such as “Oasis” and “Peppermint Candy.”

Another notable aspect of Choi’s 2009 revival is that two young stars - actor Choi Jin-young (as Demetrius) and actress Kim Hyo-jin (as Helena) - both of whom have been more active on the screen than on the stage, have joined the cast.

For Choi Jin-young, who lost his sister Jin-sil, the country’s beloved actress who took her own life last October, work has served as therapy for his deep grief.

“While I had been in despair after the incident, participation in this project saved me as I can indulge in acting without being bothered by other distracting thoughts,” he said.

As for the director’s take on the recent trend of more star actors making a debut or comeback to the stage from the screen, director Choi said, “I don’t see it negatively. I rather affirmed it because I believe that the stage is a perfect place for an actor to mature and become an artist in the long run through intensive training.

“I think Korea is particularly rigorous in segregating the stage from the screen, which is not the case in other countries as we see with, say, Meryl Streep freely going back and forth from screen to stage. I think we have to be more lenient regarding the issue so that we can have more competent actors and actresses performing both on screen and onstage,” she added.


“A Midsummer Night’s Dream” opens June 27 at the Jayu Theater, Seoul Arts Center in southern Seoul and runs until Aug. 2.