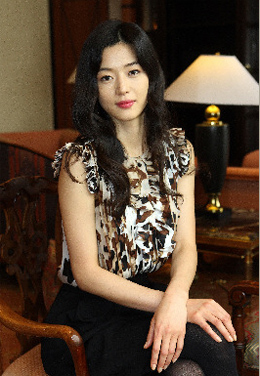 Jun Ji-hyun held a press conference in Seoul on Wednesday to promote her latest movie “Blood: The Last Vampire.”

The Korean actress met with reporters at the Millennium Seoul Hilton hotel in the central part of the city to outline the movie’s plot and describe its characters.

Jun plays the role of Saya, a 16-year-old vampire hunter out for revenge.

The film is a collaboration between production companies in Japan, Hong Kong and France. For her international debut, the 28-year-old star adopted the name Gianna Jun and spoke lines in English for the project.

Blood marks the first action movie for Jun, who is most famous for her 2001 hit “My Sassy Girl.”

“Learning English was more difficult than doing action scenes,” the actress said Wednesday. “I had to practice a hundred times for one line.”

The movie opened late last month in Japan and was released yesterday in Hong Kong and Singapore. It is slated to open at theaters across Korea next Thursday.