No pain, no gain on literary road

No pain, no gain on literary road 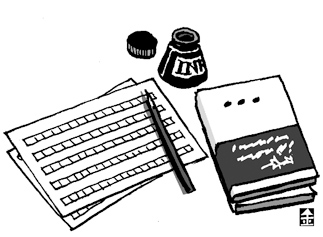 The cities and countryside have been devastated, the survivors forced to attack each other and steal what precious little food remains. Living just one day in this cold environment is such insufferable torture that a father and his young son set out on a road to find a new beginning.

“The Road,” a 2007 Pulitzer Prize-winning novel, describes sufferings of biblical proportions, similar to the Book of Revelation.

A detailed description of starvation and pain in the depth of winter’s darkness heightens the reader’s sense of reality. The detail in the narration reflects the poverty that the book’s author Cormac McCarthy suffered in his early years, living in a barn for eight years without enough money to even buy toothpaste.

Since escaping such miserable hardship, McCarthy has refused to give lectures or interviews that would net him a huge payday.

Instead, he has absorbed himself in his writing, without associating with other writers. His rare appearance on a television talk show was attributed to Oprah Winfrey’s constant persuasion. On refusing interviews, he said, “I preferred to do things my way.”

Kenji Maruyama is considered Japan’s most notable reclusive writer. He left Tokyo after receiving the prestigious Akutagawa Prize at the age of 22. He has since lived in his hometown with his wife and devoted himself to writing.

He decided against having children. He thought a child would interfere with the structured life he needs for writing.

Maruyama continues to live with such determination and discipline, his head shaven as if he were a monk. “Creation is an effort of penetrating into the depth of a spirit in a solitary manner,” he said. “As soon as I subordinate myself into literary circles and accommodate myself to popular tastes, my novels will be nothing but useless trash.”

Several days ago, the handwritten works of the late poet Kim Su-yeong, one of Korea’s most well-known writers, were published, nearly 40 years after his death. The photographic edition of his handwritten manuscripts reminds us of Kim’s painstaking reach for perfection in every detail.

However, it seems that today’s literary circles spend all their energy splintering into groups. The controversy surrounding the novelist Hwang Seok-young is a prime example, forcing us to think that Korean literature is in deep trouble.

Seeing that readers crave Japanese or American novels, we understand that the apathy for Korean literature can’t be attributed solely to readers’ reluctance toward reading novels.

If writers lack the determination to focus all their energies on their work, no one will ever be satisfied.

We hope our novelists and poets will get back to the basics and start working with renewed vigor to save our literary heritage.