A resting spot for people of ‘merit’

A resting spot for people of ‘merit’ 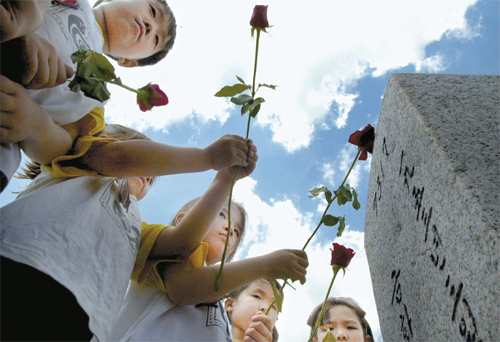 More than 10,000 visitors come to the cemetery a day. The place erupts in an explosion of pink and white cherry blossoms in spring and bright red and yellow foliage in fall. The streets located between the cemetery and the forest nearby are good for a stroll. Cars are no longer allowed here. There is no admission or parking charge and some visitors come here just for a picnic, spreading out their mats and eating lunch with family and friends.

The cemetery is a perfect place geographically, according to the laws of feng shui. It sits on Mount Gwanak and has extensive views over Noryangjin near the Han River.

The cemetery was built in 1955 to honor the fallen soldiers from the Korean War (1950-1953). However, the cemetery reached capacity in the mid 1970s. To make up for the shortfall, national cemeteries were opened in Suyu-dong, Seoul; Daejeon; Gwangju; Imsil County, North Jeolla; Yeongcheon, North Gyeongsang, and Masan, South Gyeongsang.

Some 54,000 people are buried here at Seoul National Cemetery. There are not only soldiers but also politicians, police officers and independence activists. Among well-known figures are the graves of Olympic gold medalist marathon runner Sohn Kee-chung; children’s book writer Yoon Suk-joong, and Lee Jong-wook, World Health Organization director-general. There are also 111,000 name tablets including those for unknown soldiers.

There are non-Koreans here as well such as Dr. Frank Scofield (1889-1970), a Canadian. Scofield, who was also known as Seok Ho-pil, taught microbiology at Severance Hospital, which later became Yonsei University’s medical school. He also contributed to Korea’s independence movement. Scofield’s photos of the Japanese army burning Jeamri Church in Gyeonggi in 1919 with people inside let the world learn about the atrocity.

The late Presidents Syngman Rhee (1875-1960) and Park Chung Hee (1917-1979) are buried here. Park’s wife, First Lady Yuk Young-soo, is buried beside her husband. First ladies are not routinely considered for a separate grave but since Yuk was assassinated by a North Korean spy, she was allowed that honor. First Lady Francesca Donner Rhee is buried in the same mound as her husband.

The Ministry of National Defense, which is in charge of managing the cemetery, said on Monday it would turn the cemetery into a memorial theme park by 2012. The plans would build a memorial hall within the cemetery and transform the surrounding forest into a park. The museum will consist of a movie theater, auditorium and exhibition spaces. The ministry hopes that these changes can raise the number of visitors to 5 million from the current 1 million by 2012.

In the short term, the ministry will set up walking trails, ponds and sculpture parks in the cemetery. To mark the 59th anniversary of the Memorial Month, there will be a concert by a military band at 8 p.m. on June 20.

You can also consider a visit to Daejeon National Cemetery, which honors a total of 87,201 people including past presidents, generals, soldiers and police officers. Because there are 41,188 name tablets for those who are buried elsewhere, only 46,013 people are laid to rest at the Daejeon cemetery.

Korea’s 10th President Choi Kyu-hah (1919-2006) is buried here with his wife Hong Ki. There are also tombs for family members of the country’s independence fighter Kim Gu. Kim’s mother, Gwak Nak-won, and his son, Kim In, who was also an independence activist, are buried here.