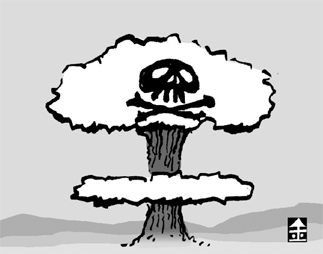 The world’s first atomic bomb was tested in Alamogordo, New Mexico, at 5 a.m. on July 16, 1945. The 20-kiloton device, code-named Trinity, left a large mushroom-shaped cloud over the desert.

The explosive power of the bomb was confirmed in warfare within weeks of the test when Little Boy and the Fat Man were dropped on Hiroshima and Nagasaki, taking the lives of 200,000 people.

Tests of the United States’ nuclear weapons technology peaked in the 1950s in the Cold War against the former Soviet Union. Tests were generally conducted in Nevada in the middle of the desert. It has been said that one of the nuclear tests caused the American movie star John Wayne to die.

In 1954, Wayne was filming “The Conqueror,” a movie about Genghis Khan, on the Utah plains. The location was 137 kilometers (85 miles) away from the nuclear test site. Over the next 30 years, 90 out of 220 of the film’s cast and crew got cancer and 46 of them died, according to “Why John Wayne Died,” a book by Japanese journalist Takashi Hirose. The figures are too high to deny the correlation with radioactivity. Wayne was diagnosed with lung cancer in 1964 but survived, before succumbing to stomach cancer in 1979. The film’s director, Dick Powell, and its leading lady, Susan Hayward, also died of cancer.

America’s first practical test of a thermonuclear hydrogen bomb was conducted on Bikini Atoll, part of the Marshall Islands, in 1954. The Japanese tuna fishing boat the Daigo Fukuryu Maru, or Lucky Dragon 5, was passing nearby when the bomb was detonated. It was exposed to the fallout, even though it was outside the safety line set by the U.S. Army. One sailor died and many complained of headaches and bleeding gums.

After a series of accidents raised awareness of the danger of nuclear tests, countries signed an agreement to ban nuclear tests on the ground and in the water in 1963. But underground nuclear tests were excluded from the ban because they were thought to be unrelated to contamination of our air and oceans. But it is possible these tests contaminate our water and soil as well as cause earthquakes.

In March, in a symposium on the Silk Road held in Japan, it was reported that since China had conducted 22 underground nuclear tests in the Xinjiang Autonomous Region, home to the ethnic minority Uigur people, the cancer rate has surged and 190,000 people have died.

After North Korea carried out an underground nuclear test on May 25, military tensions between the South and the North have intensified. Although it is said that there is hardly any chance that the test will affect South Koreans, can North Korean residents be relieved? That is truly worrisome.

The writer is a team manager of JES Entertainment.