Gate of independence, spirit of triumph

Gate of independence, spirit of triumph 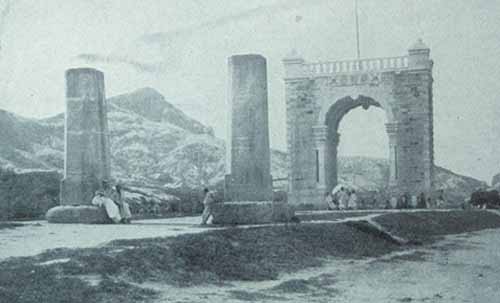 Dongnimmun, or Independence Gate in northwestern Seoul, was completed in 1897. The above picture is from “Burton Holmes Travelogues,” by American travel writer Burton Holmes (1870-1958).

Their designs may differ, their materials may vary and the reasons for their construction may not be the same, but triumphal arches are found in cities the world over.

These days, they are often little more than must-see items on a tourist’s to-do list.

But in days gone by, people erected monumental archways to celebrate victory in war or independence from colonial powers, and most importantly, to commemorate the effort it took to achieve those feats while passing the spirit on to future generations.

The Korean answer to the arch is Dongnimmun, or Independence Gate, completed in 1897. A century later it still stands tall in Seodaemun District, northwestern Seoul.

In old pictures of the city skyline, like the main one above, Dongnimmun juts out significantly, dwarfing the people below and reducing houses to the size of architectural models.

While the gate is large in size, the political implications of its construction were even bigger considering it was a cry for independence at a time when Korea was anything but free from foreign interference, direct or indirect.

During the Joseon Dynasty (1392-1910), Korea was largely under the influence of the Chinese. In the late 19th century, Japan began eyeing opportunities to annex Korea and Russia’s influence in the region was growing.

The site was previously the location of Yeongeunmun, a gate where Korean royals once greeted Chinese envoys (left). Yeongeunmun was demolished after China was defeated in the first Sino-Japanese War (1894-95), leaving only its foundation stones (second from left). In its place, a monument declaring Korea’s will to stand on its own feet at a time when foreign powers were eyeing invasion of the country was erected (left). Provided by Myongji University-LG Yeonam Library

And so it is not surprising that the question of independence was at the forefront of discussions among Korean intellectuals in the 1800s.

In September 1896, a group of opinion leaders launched the Independence Club. Their aim was “to usher in a democratic, nationalistic, modern society that is autonomous, free and powerful on its own,” according to the “Annals of the Joseon Dynasty in One Book” by Park Yeong-gyu.

In April of that year, the club had launched Korea’s first modern newspaper, the Dongnip Sinmun, or The Independent. In November, it laid the cornerstone for Dongnimmun.

A foreigner’s account of the ceremony in the book “Korea and Her Neighbours” (1989) by Isabella Lucy Bird (1831-1904), provides us with a glimpse of that day, Nov. 21, 1896. Bird was an English writer and historian who had traveled extensively.

“The graceful Pai-low, near the Peking Pass, at which generations of Korean kings had publicly acknowledged Chinese suzerainty by awaiting there the Imperial Envoy who came to invest them with regal rights, was removed, and during my sojourn the foundation of an arch to commemorate the assumption of Independence by Korea in January 1895 was laid near the same spot, in presence of a vast concourse of white-robed men,” she wrote.

Bird notes that “a number of patriotic speeches had been made” and that “the Club entertained the Foreign Legations and all the foreign residents” while “waiters were dispensed with.”

Perhaps the most interesting feature about the gate, as indicated in Bird’s book, is the site upon which it was built.

The site had been the location of Yeongeunmun, a gate where Korean royals once greeted Chinese envoys.

But after the first Sino-Japanese War (1894-1895), fought between China and Japan for control over Korea, and Japan’s resulting victory, Yeongeunmun nearly lost its function, as did Mohwagwan, a nearby royal pavilion.

According to “600 Year History of Seoul” by the City History Compilation Committee, Dongnimmun was modeled after the France’s Arc de Triomphe. It was designed by Seo Jae-pil (Dr. Philip Jaisohn) and a Swiss engineer working in the German legation whose name is unknown.

Seo, one of the leading intellectuals of the time, had led the 1884 coup for modernization, but fled to the United States in 1885 after the coup failed. He came back in 1896 with hopes of once again leading his nation in what he thought was the right way.

Seo and other members of the Independence Club launched a campaign to raise money for the construction of Dongnimmun and they hired Chinese workers to do the construction, which was ironic since it had previously been the place where Chinese envoys were greeted. 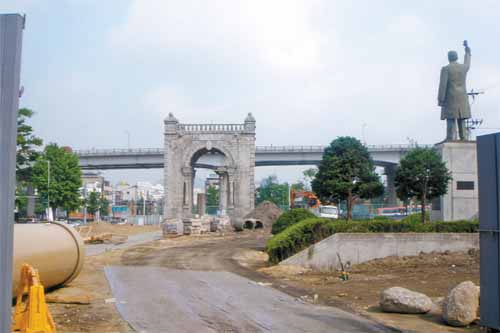 Independence Park, which houses Dongnimmun, is being restored to honor the nation’s independence efforts and construction is expected to be completed in July. A statue of Seo Jae-pil, one of Korea’s most notable independence fighters, appears on the right. By Kim Hyung-eun

While most Korean students learn in history class that Dongnimmun was the work of Seo, praised today as one of Korea’s most notable independence fighters, some say that there is another person who also deserves the credit.

“Yeongeunmun and Mohwagwan were national properties and the Independence Club was a civic group. So it would’ve been impossible for the members of the club to transform the structures to their liking, of course, without the support of the government,” said Ahn Chang-mo, a professor of architectural history at Kyonggi University.

Ahn says that along with Tapgol Park, Korea’s first modern park, and Gyeongun Palace (now Deoksu Palace), the main royal palace in the final years of the Joseon Dynasty, Independence Park was symbolic of King Gojong’s (1852-1919) desire to transform the troubled country into a modern metropolis.

In fact, several editorials in The Independent praised the government for its support of the movement toward enlightenment and modernization.

Lee Tae-jin, a professor of Korean studies at Seoul National University, agrees, says the idea that Seo built Dongnimmun is a misconception “coming from the fact that he launched Dongnip Sinmun.”

He argues that the changes in the city, such as the building of the gate, “reflect the government’s ambition for modernization as well as the king’s will for revolution.” 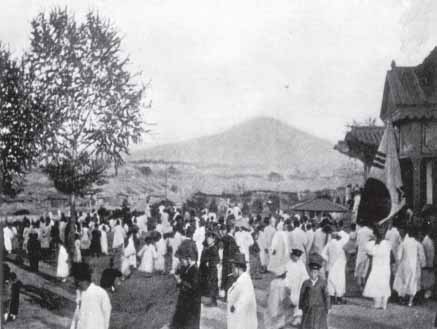 The gate today stands 70 meters northwest of its original site, after having been moved when Seongsan Highway was built in 1979.