Judge not others on the Internet

Judge not others on the Internet 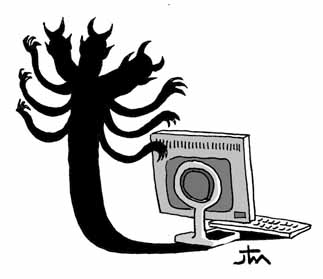 I went to see a new movie by director Hong Sang-soo. The title, “Like you know it all,” is weird.

What don’t they know?

An art film theater with nearly 100 seats was crowded on sunny Saturday, with viewers there maybe out of curiosity. It was a difficult story to understand, however there was some humor in several scenes.

Viewers burst out laughing whenever characters are at a loss for what to do, make noises without knowing what to say or continue to exaggerate or lie as if others had no idea. A woman next to me whispered to her companion, “I feel embarrassed.”

I can understand why.

Words and deeds by figures in a movie can look as real as the real lives of common people as filmed by a camcorder. They feel pain when they are misunderstood for unknown reasons. They put up a front in spite of themselves.

The worst is when people judge others’ lives. Often the criteria they use are based on common sense or the prejudice of their shallow experiences and knowledge. Then, they scold others, saying, “Live a better life.”

At the end of the movie, the actor Gu Gyeong-an criticizes a stubborn woman named Gosoon by saying, “Do not live like that. You will be lonely later.”

She responds, “What do you know about me? You know nothing of me.”

The message of this movie might be a caution against arrogance.

Dante’s “Divine Comedy” defined pride as the root cause of all cardinal sins, regarded as “unpardonable.”

Nathaniel Hawthorne’s most famous novel “The Scarlet Letter” has a similar expression. The greatest sinner in the novel is neither Hester Prynne nor Minister Dimmesdale, with whom she had an affair. It is Roger Chillingworth, who conceals the fact that he is Hester’s husband, living with Dimmesdale for seven years to exact his revenge. His cruelty leads him to trample two human hearts in the name of god, morality and spite.

Arrogant people will never love and forgive others. This is the reason Chillingworth met the loneliest end, even though he completed his righteous revenge.

If even the heart of the reader is hurt by them, how can we protect the spirit of the writer?

There is a line in “On the Occasion of Remembering the Turning Gate,” the 2002 film by director Hong Sang-soo: “Although we find it difficult to become men of decent character, let us not become monsters.”