Life after tragedy, through the lens of photographers

Life after tragedy, through the lens of photographers 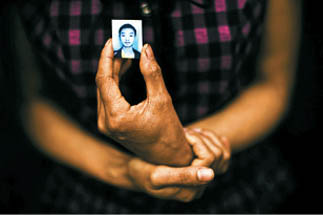 A woman holds the passport picture of her son, who was lost in the 2008 Sichuan earthquake. By Shiho Fukuda

Battlefields, sites devastated by catastrophe and war-torn countries have typically been dominated by male photographers, but an increasing number of female photographers are jumping into the fray, injecting their perspectives into the world of photojournalism.

Korean photographer Jean Chung and Japanese photographer Shiho Fukada are two such women. Their photos show the Taliban’s expulsion from Afghanistan by the United States in 2001 and the earthquake that killed more than 70,000 in Sichuan, China, last year.

In the exhibit “Humanity Witnessed: Jean Chung and Shiho Fukuda,” the two award-winning women share images of ordinary people trying to pick up the pieces of their lives.

Chung’s series “Life after the Fall of the Taliban” offers a glimpse into her year-long stay in Afghanistan, from 2006 to 2007. 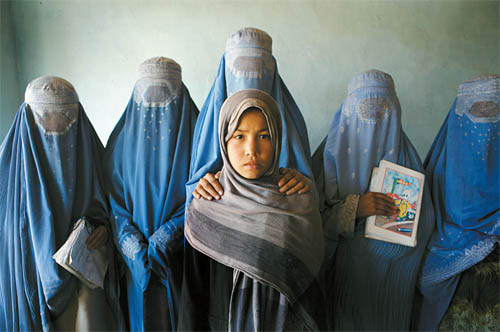 Amina, a 13-year-old Afghan girl, wants to attend school but has to support her family instead. Here, she is pictured with her classmates. Provided by Jean Chung

“I chose to live in Afghanistan indefinitely because that was where the news was happening, and as a journalist it was important to me to be at the heart of it all,” said Chung.

She was called home in August 2007, when the Korean government ordered all Korean civilians to leave the country after a group of Korean volunteers was abducted by the Taliban.

The photos she took over the course of the year describe not just the lingering insecurity among Afghans but the positive changes as well. After the Taliban was ousted, people were able to swim in public pools and women were allowed to expose their faces and go back to school even if doing so still presented a measure of risk.

Chung says the picture she most wants Koreans to see is one of a young girl in a blue hijab standing with a row of burqa-clad women. The 13-year-old girl wanted to read, but had to support her family by weaving carpets.

Chung said in an e-mail interview that she found similarities between the lives of Korean women of a couple of generations ago and today’s Afghan women.

“As I documented how young Afghan girls risked their lives to go to school, I often thought about the lives of our grandmothers and great-grandmothers,” Chung said. Korean women were also once forced to support their families and take care of their siblings instead of receiving an education.

Fukuda’s “After the Schools Collapsed” depicts the devastation of China’s Sichuan Province, focusing on the suffering of parents who lost their young children. Due to China’s one-child policy, parents who lost children were then left childless.

Fukuda returned to Sichuan a year after the quake to document the lives of people who survived it and their efforts to carry on with their lives. This is her first exhibition in Seoul.