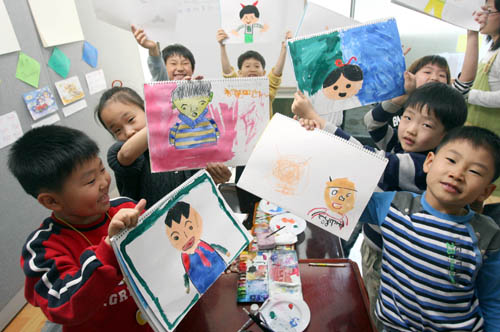 Ahn Ji-eun, 18, is a stressed-out sophomore at an independent private boarding school in Hanam, Gyeonggi. Despite 16 months remaining before she takes the national college entrance exam, Ahn worries she needs more time.

But she was relieved to hear news that schools across the country will have greater autonomy over their own syllabus when a new law takes effect next year.

“Unlike other high schools, my school is performance-oriented and my friends and I expect more gukyeongsu classes,” said Ahn late at night last week after she’d finished her studies for the day. Gukyeongsu refers to Korean literature, English and math, the three major subjects. Students have a better chance of getting into a more prestigious college if they do well in the big three.

“I want more English classes because I need a higher English score when I apply for a liberal arts college,” Ahn added. 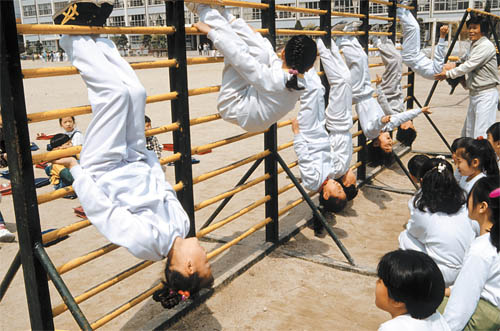 Ahn says she used to have one art and one music class per week when she was a high school freshman. She now takes one physical education class per week. If she becomes a junior next year, she doesn’t need to take any of those three classes. But it’s a different story when it comes to gukyeongsu. Ahn takes five math and four Korean literature and English classes per week.

Art, music and physical education classes have been gradually losing ground to gukyeongsu since the education ministry changed the national curriculum plan in 1992. Total hours for P.E. classes remained the same: Students are required to take three slots per week. But music and art classes went from two hours to one hour per week, depending on choices that the school principal made.

In 2007, the education ministry also changed the way yecheneung (art, music and P.E.) teachers evaluate students. Under the new system which came into effect this year, students’ performance in yecheneung is assessed under three categories - excellent, average and poor. Other subjects have nine different rating levels, and each rating has quotas.

“[The new system] is meant to make art, music and P.E. classes easier for students,” said the Ministry of Education, Science and Technology in 2007.

And now the new plan for the curriculum, tentatively called the School Liberalization Plan, proposed by the education ministry on April 30, could sideline yecheneung classes further.


Liberal, but not liberating

Under existing education laws, schools have to follow the education ministry’s guidelines concerning the allocation of classes. But under the School Liberalization Plan, schools will have control over 20 percent of their curriculum design.

“The plan caters to the diverse needs of parents and students, allowing schools more control. This will make schools more competitive and diversify public education,” the education ministry argued in a press release.

The new policy marks the first time the government has allowed schools greater options over curriculum management since the first master plan for education curriculum was announced in 1954. After announcing the School Liberalization Plan, the ministry collected opinions.

“Most of the attendees favored the plan and more details will be unveiled on June 11,” Jang added.

Educators are less gung-ho than the administrators about the plan, which takes effect next year.

“Look at the current educational environment,” said Park Man-yong, who teaches art at Yokgok Middle School in Bucheon, Gyeonggi. “Nationwide, schools have started to take evaluation tests from this year [in Korean literature, English, math, sociology and science], and the education ministry shares test results. In order not to lag behind other schools, school principals have no options but to allocate more gukyeongsu classes rather than art, music and P.E. classes.”

Park feels that schools are regressing. “They evaluate students based on how good they are at memorizing math formulas or English vocabulary. Diversity will disappear from schools and I doubt teenagers will develop their emotional quotient without art, music and P.E.,” said Park.

Park also claims that the atmosphere in his class has never been more miserable. Students do not even bring necessary supplies to art classes.

“We’re not saying that we should increase the number of yecheneung classes, but we should at a minimum keep the classes we have now. We shouldn’t reduce them,” said Lee Hong-soo, a professor of music at Korea National University of Education. Lee started his career in music education at an elementary school 44 years ago.

“The problem is if we argue that yecheneung classes are important for teenagers, people say we are only really concerned about losing our jobs, but the education ministry should admit that it is forcing schools to become more like hagwon [private institutes],” Lee added.

Another sticking point is teachers in the major subjects are not happy about taking on more classes. “The current number of English classes is almost too much for me to handle. If we have to do more, we can’t guarantee the quality of the classes,” said Lee, 28, an English teacher at a high school in Jongno District, central Seoul. Lee didn’t want her full name to be used.

The education ministry’s plan, however, drew a mixed response from parents and students.

“I’m happy for the new plan because their [students’] main goal is getting into a prestigious college,” said Park Yeon-hee, a 44-year-old mother of two. But Kim Eun-hyun, a parent in Jamsil, a neighborhood in southeastern Seoul that is home to numerous hagwon, has a different point of view.

“Students need time to let off steam, and if the number of yecheneung classes is decreasing, I’m worried about students’ mental health,” said Kim, who has one college freshman and a high school freshman at Kyunggi High School in Samseong-dong, southern Seoul. But the Kyunggi student, Choi Jae-yong, has a different take on the new plan.

“I think we are exposed to enough art, music and P.E. in elementary and middle school. So I think it’s good to focus more on gukyeongsu in high school,” he said.

Others were concerned about the education ministry’s new plan. “What helps teenagers the most is reducing unnecessary competition to help relieve stress,” said Kim Bung-nyun, a professor at Seoul National University Hospital specializing in child and teenage psychology.

Cheong Jean-gon, Blue House senior secretary for education, science and culture, wrote in a newsletter issued by the Blue House in mid-May that he will try to change the university admissions process to that of developed countries. “We want to improve our current score-based admissions process so that our children can lead a happy life while developing their talents,” said Cheong.

“Korean teenagers compete for higher scores during three years of high school, but students in other countries such as the United States read, write, do volunteer activities and enjoy sports such as taekwondo and tennis.”