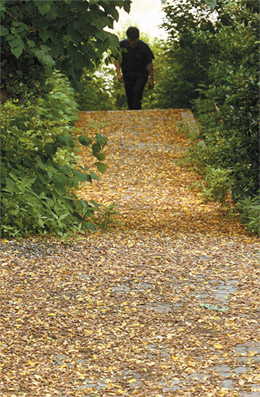 These leaves have turned yellow, allegedly due to the effects of global warming. [JoongAng Ilbo]

If you’ve visited Mount Namsan recently, you have probably noticed that the acacia, with their small yellow and white flowers and sweet, distinctive fragrance, are gone.

In their place you may have been surprised to find the area littered with tree stumps. They are all that remain of the more than 100 acacia trees that once dotted the mountainside. They were cut down early last month.

But the deforestation of the acacia is not limited to Mount Namsan. Acacia trees in the Jongno and Eunpyeong districts, which number about 600 and 100, respectively, have already met the same fate under a city government program aimed at getting rid of the trees. The move runs counter to arguments from those who say that the trees, which provide valuable honey and timber, are indispensable to various Korean industries.

What on earth has put these trees in such danger?

In April, the Seoul Metropolitan Government announced a plan to restore “damaged” forests to create an ecologically stable habitat in which humans, wild plants and animals can coexist.

In the process, “inferior trees” will be cut down to be replaced by trees native to Korea that are deemed better suited to the forest’s ecology, including pine, oak and wild pear.

Acacia were included on the list of “inferior trees” and felled as a result.

One government official said the trees were also being eliminated as part of the city government’s Namsan Renaissance project. The project aims to turn the mountain into a world-class tourist attraction.
Danger to humans

The city defends its position.

“In fact, aside from the [city’s] project, there have been a slew of civil appeals reported to district offices across the city in recent years saying that acacia trees are harmful to people,” the official, Kim Hyun-pal, said. He is with the city’s Green Seoul Bureau and involved in the city’s afforestation project.

“The roots of acacia trees don’t extend deep into the soil. As a result, they are easily toppled by strong winds and heavy rain.

“There were a number of cases reported in which acacia trees lining the streets fell on passing cars and those lining mountain trails fell on hikers,” he added.

“Considering the inconvenience to citizens as well as the project of restoring forests in the city, we plan to cut down acacia trees on mountain trails and in residential districts across the city,” Kim said.


Matter of life and death 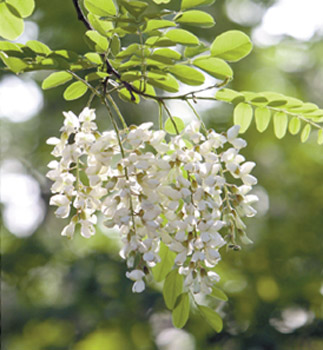 The life span of the acacia may also have been a factor in the city’s decision. Acacia live for about 40 years, which is shorter than the hundreds of years other trees can live.

“Existing acacia trees were mostly planted in the 1960s when the government carried out a large-scale afforestation project, so their life span has almost come to an end anyway,” Kim said.

Following the Korean War (1950-53), the country was left with a lot of barren mountains and afforestation was carried out to replace what had been lost.

“Acacia were chosen because they grow fast, enrich the soil and the wood can be used for firewood, which was in demand at that time,” Park Yong-gu, professor of forestry at Kyungpook National University, said.

Park, who has conducted extensive research on acacia, asserts that the tree has more value than is generally known and therefore should be preserved.

“It is wrong to remove trees simply because of some damage caused by them. Above all, acacia are not inferior trees considering the good things they can provide,” Park claimed.

“For example, about 80 percent of the lumber used in Hungary is from acacia. Also, because acacia wood rarely decays in the rain, unlike lumber from other trees such as poplars, the roofs of buildings housing hot springs resorts in Budapest, Hungary, are usually made with acacia,” he added.

Acacia honey is considered a delicacy, and is known for its flowery taste, Park says, and honey made by bees using acacia blossoms accounts for a significant portion of domestic honey production.

“Acacia are indispensable to the country’s bee farming industry since about 70 to 80 percent of honey produced domestically comes from acacia flowers,” Park said.

There are about 40,000 bee-farming households in the country posting annual sales of about 400 billion won ($318 million), according to the Korea Beekeeping Association.

The further disappearance of the acacia would threaten the domestic beekeeping industry as a whole, apiculturists say.


Out with the old

Park argues that acacia began to fall out of favor with the government beginning in the 1990s, when it moved to discourage cultivation of the trees.

“The Korea Forest Service selects species of trees for which forestation should be encouraged every year, and acacia, which had always been included on the list, was removed from the list beginning in the late 1990s,” Park said. 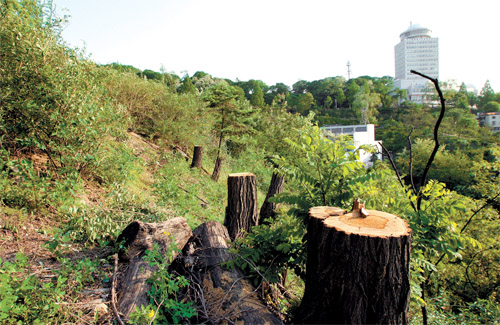 Many of the acacia trees on Mount Namsan were cut down early in May as part of the Seoul city government’s forest restoration project, in which “inferior trees,” including acacias, will be replaced by promising trees from species native to Korea, such as pine, oak and wild pear trees. By Choi Jeong-dong

To make matters worse, a lot of acacia around the country are afflicted by blight and their short life spans only add to the threat, he added.

“While weeding out old and sick trees, the government should preserve and cultivate acacia for use as timber and as a source of honey,” said Park.

However, the Korea Forest Service’s stance seems somewhat different from supporters of acacia like Park.

“Given that over 90 percent of the timber used in this country is imported, we have to focus on promising species of trees so that we can compete in the global lumber market,” said Yu Geun-ok, researcher at the Korea Forest Research Institute, which is affiliated with the forest service.

“The trees in which we currently have an interest are tulip trees. They are relatively immune to blight and harmful insects as compared with acacia. Like the acacia, they are commercially viable as producers of honey,” he added.

Yu acknowledged that acacia had largely contributed to the afforestation of the country, but said their value has declined over time due to the negative effects of global warming, implying that the acacia are at a disadvantage in terms of natural selection.

“Acacia are native to the eastern part of the United States, where the climate is rather cool. Thus global warming has an affect on the acacia, turning its leaves yellowish and inviting leaf beetles,” Yu said. “As a result, acacia trees fail to grow and flower well, subsequently disturbing and reducing the production of honey.

“It would be good if we could sustain the acacia, but the present circumstances are not so favorable for the tree. It’s a kind of natural selection, I think,” he added.

While controversy over the acacia’s merits and faults has developed, propelled by the recent elimination of acacia trees in Seoul, it remains to be seen whether the acacia will find its way out of the maze of issues endangering its existence in Korea and back into the forest.