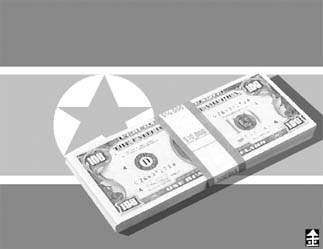 The new 50,000 won bill that will be introduced late this month features Sin Saimdang, the 16th-century female writer and calligrapher. Sin will be the first woman to appear on a banknote in Korea. Around the world, it is also rare for a woman to adorn a nation’s banknotes. Besides the obvious sexism, there is perhaps a legitimate reason, too: The more intricately detailed a man’s beard on a bill appears, the more difficult it is to forge. This was even more pertinent in the past when printing technology and anti-counterfeit measures were not as advanced as today. Currently no bald men appear on our banknotes. This also could have something to do with anti-forgery.

A banknote is a combination of printing technology and know-how of the time. If the security measures for banknotes are penetrated, a country’s economy and social order are threatened. It’s even more serious for the U.S. dollar as the greenback acts as the world’s key currency. The image of a $100 bill is drawn with 0.01-millimeter fine lines. Special patterns, not visible to the naked eye, are hidden around the bill. The ink used is a high-tech substance that can be found on spaceships. In spite of such measures, however, supernotes - nearly perfect counterfeits - have been successfully created, mocking the latest in anti-counterfeit technology.

The U.S. has long suspected North Korea of creating supernotes. Some disregard the suspicion, however, saying that a country with such a poor economy is unlikely to possess the required high-tech counterfeiting technology. The Swiss Federal Police expressed its doubt and said considering the printing technology used in supernotes, North Korea’s own notes wouldn’t be produced so poorly if it had such capabilities. A major German newspaper came up with the conspiracy theory that U.S. intelligence agencies created superdollars for secret operations and blamed North Korea instead.

In 2005, when the supernote issue was first raised, the former Roh Moo-hyun administration was dubious about the U.S.’s claims. The Roh administration was against putting pressure and imposing sanctions on the North in reaction to suspicions North Korea was responsible for the supernotes. When briefed by the U.S. Department of the Treasury, a Korean diplomat requested solid evidence that North Korea had created supernotes. An American official retorted by asking what kind of foolish criminal minds in Pyongyang would print “Made in North Korea” on counterfeit notes.

After pondering its North Korea policy, the U.S. has played the supernote card again. Not surprisingly, the U.S. Treasury’s Under Secretary for Terrorism and Financial Intelligence Stuart Levey is at the forefront again, just as he was four years ago. In the meantime, North Korea has moved closer to nuclear armament through two nuclear tests. It appears as though the past four years have been lost.