Stellar skies of stars and sorrow

Stellar skies of stars and sorrow 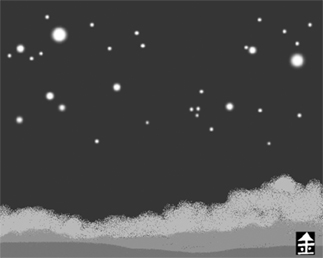 “Of all those numerous stars, one in particular looks down upon me/ Of all these countless people, my eyes are set upon one particular star/ … So intimate are the star and I/ Makes me wonder where and in what form we will meet the next time.”

The star in Kim Kwang-sup’s poem “In the Evening” symbolizes everlasting yearning. The object can be a past love or a loved one who has passed away.

Human beings don’t need to be poets to appreciate the stars in the sky. We are naturally drawn to them because the human body’s chemical composition resembles that of an asteroid.

The human body consists of hydrogen, oxygen, carbon, nitrogen, calcium and phosphorus. Excluding helium, the human body is formed from the same cloud of matter that forms the Sun.

The planet Earth, on the other hand, is made up of oxygen, iron, silicon, magnesium and sulfur. Some scientists believe humans may have come from asteroids because of the similarities in our chemical makeup.

Some poets will say this is why human beings sublimate the aching feeling of longing through stars and gaze upon stellar skies to bring separated loved ones back home.

Kim also used a star to embody the feelings of sadness and regret from a long and painful breakup, shining conspicuously even from far off in the universe.

One’s loneliness when channeled and uplifted to a more sublime feeling can glow and shine upon others like a star.

Grief generated by a separation sometimes needs to be filtered.

In Confucianism, people are required to mourn and grieve the deceased for around two weeks after the funeral. From then on, they must stop crying and lamenting, and instead turn the memorial ceremonies into a joyous event.

In Buddhism, the period of tearful mourning should last for 49 days at most. If one’s grief is too much, the spirit of the dead cannot move on to the next world and is instead chained to this world. Songs of praise for the dead should replace sorrow on the 50th day.

Under Confucian practices, the tears should already have dried for the late President Roh Moo-hyun, who committed suicide last month. But the mourning fails to cease.

Members of the main opposition Democratic Party are milking the momentum of this mourning. Clad in black and carrying placards condemning the government for Roh’s death, they take to the streets. These politicians not only lack respect for the deceased, but have wronged the democratic parliamentary system.

It makes us wonder if they truly bear any sadness in their hearts. Undoubtedly, they have no reason to look up to the sky in search for stars, and that’s just sad.