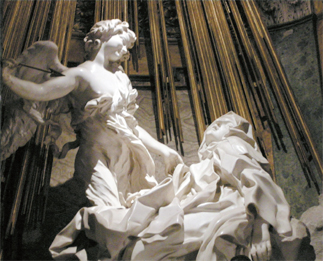 Even if you are not a fan of the movie or the book, the scenery in the film adaptation of “Angels and Demons” is breathtaking.

In one standout scene, cardinals from around the world have gathered in the Vatican for a papal conclave to elect a successor to the recently deceased pope. Dressed in scarlet mozzetta, they ascend the marble steps that lead to a set of heavy wooden gates.

As they pass through, they are met by a cobalt blue sky and muscular figures from the Bible painted on a vaulted ceiling, a visual treat courtesy of Michelangelo (1475-1564).

The conclave is always held behind the closed doors of the Sistine Chapel under the watchful eye of Michelangelo’s murals.

The movie, based on a novel by Dan Brown, author of the controversial “The Da Vinci Code,” includes numerous shots of paintings, sculptures and architecture dating back to ancient Rome, the Renaissance and the Baroque era.

These images have found their way into numerous books and TV programs and are, of course, popular subjects for the postcards sold outside the chapel and elsewhere in the Vatican City.

The irony is that Dan Brown’s fiction has never been rated very highly. Good plots, perhaps, but the writing is panned by just about every living critic.

Both the book and film versions of Angels and Demons have been deemed better than The Da Vinci Code, though that is hardly praise worth trumpeting to the back rows.

But if you can divorce cranky story and wooden dialogue from what you are looking at, you are in for a sumptuous visual treat.

Of course, the scenes in the movie were not filmed in the Sistine Chapel. Would the papacy have let a Dan Brown-inspired project anywhere near the Holy See of the Catholic Church? Probably not.

Instead, the filmmakers had to make do with elaborate copies of the murals in Californian studios.

One standout work in the movie is the “Crucifixion of St. Peter” by Caravaggio (1573-1610), an early Italian Baroque master.

St. Peter’s face and body nailed to a cross are exposed to bright light, and his tormentors dragging the cross into position are concealed in shade. This contrast is characteristic of Caravaggio’s work and serves to heighten the tension and anguish. 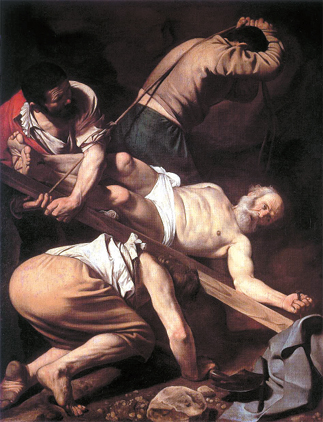 But why are they standing the cross bottom up?

Peter, the first of Jesus’ disciples, apparently asked to be crucified upside down because he didn’t want to die in the same way as Jesus.

The painting by Caravaggio is held in Santa Maria del Popolo church, which is where, in the movie, an assassin kills the first of the four Preferiti, or primary hopefuls for the papacy.

We only catch a glimpse of the painting in the film. Professor Langdon (Tom Hanks) whizzes past it on his hunt to find the doomed first Preferiti.

However, the movie is about a series of events surrounding a conclave to elect a new pope, making the appearance of the painting very meaningful.

The pope is regarded as a successor to St. Peter, the first of the 12 apostles. And he was the first bishop of Rome, according to the Catholic tradition.

Another impressive piece of art in the film is the “Ecstasy of St. Theresa” by Gian Lorenzo Bernini (1598-1680), a sculptor from the Italian Baroque period.

It was created for the Cornaro Chapel in the Santa Maria della Vittoria.

Bernini’s group of sculptures is based on a mystic experience by Theresa of Avila, a Spanish nun (1515-1582) who led a reform movement in the Carmelite Order to which she belonged.

Theresa, who was canonized after her death, wrote that a beautiful angel thrust the burning point of a golden spear into her heart.

When he withdrew the spear, she felt extreme pain but also extreme joy and the great love of God. 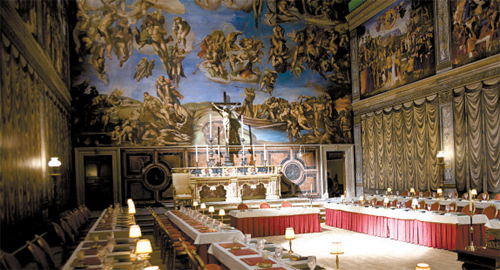 Filmmakers built an elaborate replica of the Sistine Chapel and Michelangelo’s murals for the recent movie “Angels and Demons” in a Los Angeles studio.

“The pain was so great, that it made me moan; and yet so surpassing was the sweetness of this excessive pain, that I could not wish to be rid of it,” she wrote.

Bernini conveys Theresa’s ecstasy through her swirling clothes, her thrown-back head, her half-closed eyes and her half-open mouth against a backdrop of sunlight and cloud.

The scene can be read as spiritual ecstasy but it can also be interpreted in a more overtly sexual way. Many writers and artists have pointed out that Bernini’s work synthesizes spiritual and sexual joy.

But perhaps this is not so surprising.

Until one’s soul is separated from the body, extreme spiritual and sexual joy will be similar, won’t it?

The Santa Maria della Vittoria is where the third of the four kidnapped Preferiti is executed - burned at the stake - a fitting location and end to the hapless cardinal since Theresa was known as the “the saint on fire.” She felt the love of God pierce her like a scorching flame.

So even if you are bored to tears by the movie, the pieces of art that flash across the screen are enthralling. After seeing the Archangel Michael on top of the Castel Sant’Angelo and Bernini’s fountains you might be tempted to splash out on a holiday to Italy to sample the art for yourself.