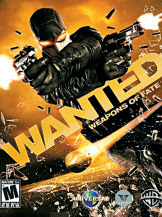 The game starts with the protagonist Wesley Gibson going through a recurring nightmare of his mother being murdered.

It’s an interesting start to the game “Wanted: Weapons of Fate,” but the story line is about all it has to offer.

One of the perks of video games is that gamers get a chance to control characters and determine the outcome of the plots. If you’re a film buff and a spin-off of an entertaining film is made into a game, it can make the gaming experience all the more interesting. I’m afraid I can’t say that about this one.

That’s not to say the game is a total flop. I’m sure there are people out there who might enjoy this title, and it does offer a twist on the third-person shooting genre. One possible downside is the foul language littered throughout. I don’t necessarily like it one way or another but it is something that is not commonly seen in other games.

Wanted: Weapons of Fate picks up from the end of the 2008 film “Wanted,” featuring James McAvoy and Angelina Jolie. Gibson, now a trained assassin, is on a mission to seek out the French chapter of The Fraternity to discover the truth about his family and his strange nightmares.

The game offers three levels of difficulty but as a whole is easy. With a brief tutorial on the basic controls, most gamers can breeze through the levels.

Unlike its competitors, Wanted offers nothing more than the basic aim-and-shoot option with the occasional slow-motion features, which are a poor attempt at replicating bullet-dodging sequences from “The Matrix.” Gamers can use the famous curving bullets at their own discretion while collecting the adrenaline points that come with kills; it’s fresh, but nothing spectacular.

The graphics are poor for a game released this year. The overall game play is also very weak - so weak I could have played this title years ago with my friend in his basement on his PlayStation 2. The game is rather dry and too basic to warrant a high grade.

The verdict: Forget about going on a wild goose chase around France in search of the French chapter of The Fraternity. Playing this game is like munching on an order of plain French fries day in and day out without any ketchup - dry and devoid of flavor.

The best part of the game is the plot, and then all goes downhill from there.

If you’re looking for something more than a simple shoot-and-chase affair, no amount of curving bullets and slow-motion frames that allow gamers to dodge bullets will enhance the experience of playing Wanted: Weapons of Fate.