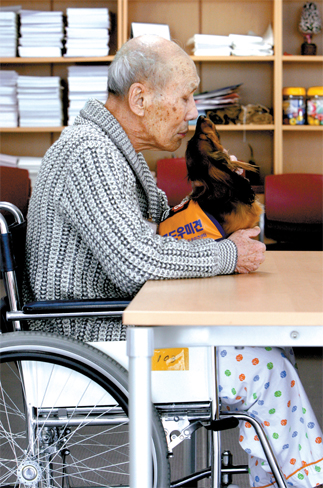 At Bobath Memorial Hospital in Seongnam, Gyeonggi, Sim Jae-cheon, 94, who is suffering from dementia, spends time with Namu, a dog trained to help treat patients like Sim. By Choi Jeong-dong


They say dogs are man’s best friends. Yes, we love their big, droopy eyes and wagging tails. But for some people, canines are something more than just close buddies.

In recent years, many patients suffering from conditions such as Alzheimer’s disease, depression, schizophrenia, autism and attention-deficit hyperactivity disorder have been turning to animal-assisted therapy (AAT). According to the Samsung Canine Center Web site, “Therapy dogs play an important role in stimulating the hearts and souls of those with emotional and psychological conditions to develop better relationships and regain sociability.”

Historically, the first recorded case of AAT is said to be from ninth-century Belgium when farm animals were used to train people with disabilities. In the late eighteenth century, York Retreat in England, a home for those with mental disorders, had patients take care of rabbits and chickens for therapeutic purposes.

But it wasn’t until the 1960s that AAT came under the medical spotlight. One of the most well-known case studies is Boris Levinson’s experiments with the pet dog Jingles in 1961. Levinson, who was a child psychologist, discovered that having Jingles around during his therapy sessions made younger patients more open and reactive. 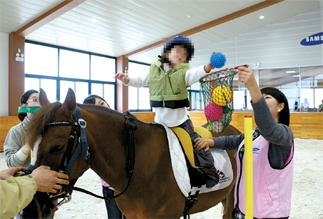 Yang Jun-seok, 5, rides a horse as part of treatment at Samsung Equestrian Team in Gunpo, Gyeonggi. By Kim Jean-kyung

He wasn’t the only one fascinated with animals. Before Levinson and his co-therapist Jingles, Sigmund Freud had strongly believed that dogs had a “special sense.” Jo-Fi, Freud’s chow chow, attended all of his master’s sessions because the doctor thought the dog had a positive effect on clients.

Though these two renowned psychologists received mixed reactions about their findings, nowadays AAT is generally accepted as useful and is quite popular especially in countries like the United States, England and Japan.

The therapy wasn’t used in Korea until 1990. Inspired by the Delta Society, a human-services organization in the U.S. that registers pets for AAT, the Korean Animal Hospital Association launched a dog therapy program called “Animals Are My Friends.” Samsung Group followed a few years later with the Therapy Dog Program in the Samsung Canine Center.

This form of therapy is also catching on at nursing homes, rehabilitation centers, psychiatric wards and even correctional facilities. Bobath Memorial Hospital in Bundang, Gyeonggi, is a specialized medical center for seniors diagnosed with neurological disorders and chronic medical diseases. The hospital has been working with dogs since June 2007.

Sim Jae-cheon, a 94-year-old Alzheimer’s patient, has befriended a one-year-old dachshund called Namu. Sim, who rarely expresses any emotions, brightens up when he sees his canine buddy, lavishing affection on the pooch. Staff say the change in Sim around Namu is remarkable.

Similarly, Choi Gyu-deok, 80, is an entirely different person when the fluffy Pomeranian called Gongju is beside her, staff say. Choi, also suffering from Alzheimer’s, is notorious for her aggressive behavior, but she becomes better natured with Gongju.

The two therapy dogs have been staying at Bobath for about a year now to lend a helpful paw and be a friendly companion for the elderly.

Lee Jeong-wook, a doctor at Bobath, believes animal therapy is beneficial. “I’ve been studying patients for a long time and I can see for sure that this kind of method increases their emotional stability.”

Because security is the most important factor when patients are dealing with animals, training centers take great care in selecting the right ones. “Their health and personality are what we see most,” says Ha Woo-jong, the promotion assistant for the Samsung Canine Center. “From household pets to abandoned dogs, it doesn’t matter. They just need to be fun-loving and sociable.”

Ha says that the center trains therapy dogs to bring out the best in individuals. One dog would learn to roll over and play dead at the sound of someone’s voice shouting, “Bang!” Certain dogs can be taught to help patients in wheelchairs or play games to improve people with memory problems.

“Animal therapy is a great way for the patients to feel a sense of accomplishment,” Ha explains.

In fact, it’s not just dogs that are used in AAT. Horses, cats, birds, dolphins, elephants, rabbits, fish and even lizards are known to be good “comfort animals.”

Equine-assisted psychotherapy, or treatment involving horses, has been proven to be especially effective. Studies show that riding can improve balance and stability for people with physical disabilities and learning difficulties.

Samsung, in addition to its projects with dogs, started a horse-assisted therapy program in 2001. In 2005, the Korea Racing Authority launched one of its own.

Norangi, a German pony with a fine brown mane, has been working for four years in Samsung’s Riding for the Disabled Program. With 5-year-old Yang Jun-seok on his back, Norangi trots slowly around a sand field at the EAP training area in Gunpo, Gyeonggi.

Equine-assisted therapy is a bit more complicated than being with dogs. For one patient to be on a horse safely, at least three to four people are needed to stay on each side of the animal. These helpers, usually one leader, two side-walkers, and one instructor, see to it that both the client and the horse are safe and stable.

According to research by the Department of Rehabilitation Medicine at the Samsung Medical Center, 335 of the 375 children who have cerebral palsy (89.4 percent) and participated in EAP from 2001 to 2008 improved in their physical performance.

“The results were even better when EAP was integrated with physical therapy,” remarked Kim Yeon-hee, a rehabilitation doctor at the Samsung Center.

Meanwhile, dolphin therapy is popular in other countries. Swimming with dolphins for therapeutic purposes first began in the 1970s in Florida as a fun way to motivate children with Down syndrome.

But are there any downsides to using animals for therapy?

Park Jong-gwan, director of the Korea Assistance Dog Association, says caution is essential. “It is risky for parents to buy pets for autistic children without acquiring some basic information,” he warns. “These kids will get worse if they are with animals that haven’t received proper training.”

Studies at Emory University in the U.S. are critical of animal therapy. In 2007, Lori Marino and Scott Lilienfield at Emory claimed dolphin-assisted therapy is bad for people and for dolphins, claiming no long-term studies have shown the effectiveness of DAT and that this method could endanger the lives of the marine mammals.

In Korea, there is very little research done in the field of AAT.

“We’ve been operating the program for nearly two years now but we do not have many studies or statistics [on participating patients] made yet,” says Lee of the Bobath hospital.

This may be due to the short history of animal therapy in the nation.

“Therapy dog programs are not supported by the government, and the country does not have a certified organization like the Delta Society,” says Ha. Related facilities agree that unified guidelines need to be established.

“Rules need to be set for the safety of the patients, staff and also the animals,” one center comments.