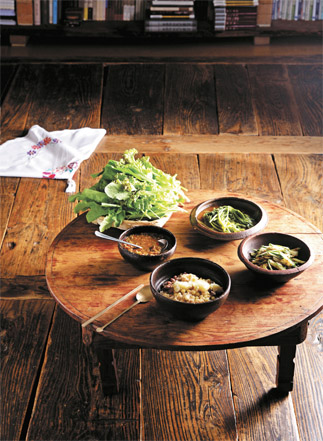 Bowls of boribap, bean paste soup and lettuce at a restaurant. Provided by Lemon Tree

A few decades ago, Koreans ate boiled barley just to survive. Now they eat it to get healthy.

As part of a general trend toward smarter eating, diners are checking out new barley-themed restaurants in the hope of reducing weight and improving their overall blood sugar levels.

Barley has gone from being the poor cousin of rice and other crops to a respected health food.

In the 1960s, particularly in spring, people didn’t have enough rice to fill their stomachs so they consumed barley instead. An average Korean devoured nearly 40 kilograms (88.2 pounds) of barley each year. This was a huge amount considering that Koreans consumed little more than 1 kilogram of barley per person last year.

Now, there is a surplus in rice production and there is no need to replace rice with barley.

According to “Dongeuibogam,” a book about oriental medicine by Heo Jun during the Joseon Dynasty (1392-1910), barley produces a high amount of energy.

Still, oriental medicine doctors use barley for medicinal purposes. “Malt [barley that has germinated] soothes the stomach and is used to treat indigestion and diarrhea,” said Kim Sang-woo, vice chairman of Bundang Cha Oriental Medicine Hospital. Malt is also used when babies have a stomachache.

Despite its advantages, barley has rarely received the type of praise heaped upon rice in this country. Customarily, serving a bowl of rice was considered the best treatment for guests and many Koreans still follow the tradition. 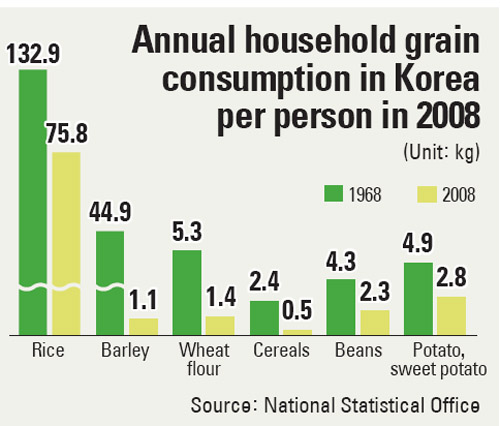 Barley had no place here.

Beginning in the early 1970s, the government promoted eating grains other than rice, but it did not help increase barley consumption much. 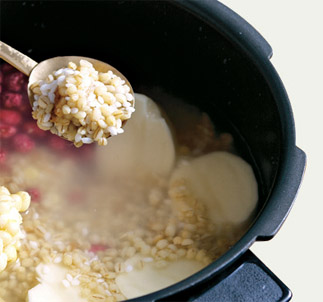 Boiled barley is not thought to be as tasty as boiled rice and many people believe it is hard to digest.

Rice is still the staple food for Koreans, who on average consumed 75.8 kilograms each last year, but ate 8 kilograms of food derived from other crops such as potato, wheat flour, barley and beans.

“Rice has been the staple food for a long time,” said Kim Dong-jin, a researcher at the Rural Development Administration. “The Korean Peninsula has enough rainfall to cultivate rice. If we didn’t have enough rainfall, we could have to depend on other grains.”

However, a series of studies on the health benefits of consuming barley has cast a new light on this grain. With growing interest in health, restaurants specializing in boribap (boiled barley) have opened up over the last few years. Now there are even barley-themed buffets and festivals.

Most recently, a team from Korea University Anam Hospital led by Cho Kyung-hwan conducted research on the level of sugar and cholesterol from eating boiled rice, a mix of boiled rice and barley, jjajangmyeon (noodles with black bean paste) and hamburgers.

Eight students living in a dormitory consumed 600 calories of food each in different time periods and then had their blood sugar levels tested. Even though the servings contained the same amount of calories, sugar levels increased most after jjajangmyeon. Next were hamburgers, followed by rice, then a mix of rice and barley.

“Their blood sugar levels shot up after they ate jjajangmyeon and hamburgers,” Cho said.

In addition, neutral fat levels doubled after the students had hamburgers, a level that was maintained for three hours.

In contrast, subjects’ fat levels did not grow when they ate a mix of rice and barley.

In another experiment, 20 students just had a mix of rice and barley while another 20 consumed rice, sandwiches, jjajangmyeon, pizza and noodles.

After three weeks, the participants’ weight, blood sugar levels and cholesterol were measured. The first group of students who had eaten a mix of rice and barley lost an average of 1.2 kilograms while the other group lost only 0.4 kilogram during the same period.

“The second group also lost weight, but not much. Their weight loss can be attributed to the fact that they ate regularly and stopped drinking during the experiment,” Cho said.

He also pointed out cases of diabetes, obesity and hyperlipemia (raised fat levels) are on the rise here.

“A traditional diet of mixing grains could be an alternative to the modern diet,” Cho said.

The magic of barley lies in a substance called beta glucan, a vegetable fiber that is abundant in barley. The fiber stimulates peristaltic movement and prevents constipation, but it is difficult to digest and increases gas.

Then is it better to eat all-barley rations?

The heath benefits of eating boiled barley could explain the crop of boribap-themed restaurants springing up across the country. In the past, boribap restaurants were found near the foot of mountains or more modest neighborhoods. There are still restaurants that serve boiled barley cooked in a large cauldron, which is said to be the best method because the heavy lid keeps the steam inside.

However, now boribap restaurant chains can be found in the heart of the capital. Such eateries tend to promote a traditional Korean diet that mainly includes vegetables. Normally, boribap is served with soybean paste soup and lettuce. Diners wrap the boiled barley with lettuce and add soybean paste.

One of the most famous boribap restaurant franchises is Sawole Boribap, which now has four branches. It first opened four and a half years ago in Sinsa-dong, southern Seoul. Many people doubted its future, but it turned out to be a huge success.

“We targeted a wealthy neighborhood because I thought the wealthy would seek more traditional food,” said Oh Jin-kwon, the owner of the restaurant chain. “Besides, less affluent people tend to eat meat when they dine out.”

The restaurant’s interior is also notable. Unlike boribap restaurants of the past, this one is modern and pleasant. The restaurant’s boribap set includes boiled barley, lettuce and assorted herbs and other vegetables. It also has dishes that go well with boribap such as mackerel stew or bulgogi (marinated beef) with mushrooms.

Oh said the restaurant tried to make its boribap as close as possible to boiled barley cooked in a large cauldron the old-fashioned way.

“I got an idea from a traditional market where people had a mix of rice and barley with assorted vegetables,” said Jeong Chang-soo, the owner of the restaurant.

In addition to boribap and assorted vegetables, the buffet offers a variety of dishes including tofu kimchi; japchae, a mixture of vegetables, thin noodles and sliced beef; and bean paste soup in a heated earthenware bowl.

“People have different tastes. They can pick and choose whatever they like along with boribap,” he said.

Jeong said eating boiled barley is becoming more popular because of its health benefits. Some customers even try to soothe stomach problems with boribap.

* According to the NSO, Koreans consume more meat and processed foods these days and this is attributed to the decrease in household grain consumption