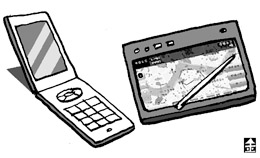 Nowadays seeing a person walking down the street talking on a cell phone has become such a ubiquitous sight that a picture of modern man with one hand next to his ear should be painted next to the ape-like Cro-Magnon to depict the evolution of humans.

It seems farcical that medical professionals are making such a fuss about this. Just like people who suffer daily from the constant pain of tennis elbow after playing tennis, cell phone gabbers complain of pain or numbness in the hand - especially the pinky and ring fingers.

We cannot avoid using cell phones, despite elbow pain and electromagnetic waves, as they empower humans to reach beyond geographical boundaries.

In addition, human capabilities are much larger than a decade ago thanks to the emergence of laptop computers, wireless Internet and car navigation.

Yet with all these portable digital devices, the memory devices they hold store much more information in a more precise manner than the human brain.

The technology is designed to control robots or machines by drawing on signals from the human brain.

We cannot predict whether progress in genetic engineering, robotics engineering, information technology and nanotechnology will raise human capability to an even higher position.

If such developments occur, we could live healthier and longer lives, and see huge progress in easily overcoming cultural and linguistic barriers. It is likely that a human with no need for sleep or food may emerge on earth.

However, it is a fact that we are deprived of true rest and spiritual freedom by cell phones ringing off the hook regardless of time or place. We have no need to use our brain due to calculators and dictionaries. Even the list of telephone numbers we remember is getting shorter.

Research shows that as humans evolved from Australopithecus to Homo sapiens, the skull volume expanded.

However, the size of the human brain has seen a 10 to 15 percent decrease over the past 30,000 years. While relying more on equipment or social systems, the role of the brain might be on the decrease.

Humans are slowly evolving toward becoming cyborgs. However, naturally born humans, the underprivileged who possess no cutting-edge portable digital devices, are unlikely to win in a battle of the species.

We worry that the situation might be even worse than projections of the future.