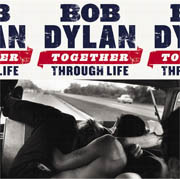 Caustic, lusty and as skeptical as ever, Bob’s still playing the outlaw consumed with a “restless fever.”

“Together Through Life” is Bob’s 897th studio recording - I should know, I have them all on my iPod - and critics have been generally positive, though “it’s not one of his best,” coo some, as if there’s a competition going on.

It took me a few listens to get into, but the album is mellow, uncomplicated and contains mischievous lyrics that remind me of the snide Bob of old.

I didn’t care for throwaway tracks like “Shake Shake Mama,” but “This Dream of You” conjures up the Rolling Thunder era of 1976 and “Life is Hard” is as good as anything on “Time Out of Mind” (1997).

Bob chews through his lyrics, a grumpy old hound in a pokey kennel. Who cares for pretty voices? Bob’s pipes are soaked in the blues, soaked in mortality. “The sun is sinking low/ I guess it’s time to go/ I feel a chilly breeze/ In place of memories,” he grumbles, saloon doors swinging in the dusty breeze. By Michael Gibb