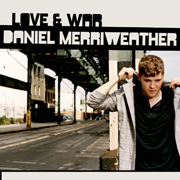 New faces come and go in the music industry, so nowadays when a new artist comes on stage, he needs a famous name to back him up. In Daniel Merriweather’s case, it was Justin Timberlake. Supposedly, Merriweather was the next guy who was bringing “Sexy Back.”

When I picked up Merriweather’s CD, he didn’t look anything like the former ’N-Sync star save the curly hair. The music? No. Definitely not Timberlake style. But this rookie from Down Under (yes, he’s from Melbourne) is no joke. Tracks like “Change,” and “Impossible” are catchy, while “Giving Everything For Free” and “Cigarettes” are ballads that may remind some of John Mayer. “Water and a Flame,” featuring Adele, and “Red” are also some of the impressive tunes on this album.

The 26-year-old wrote and performed all 12 songs, and he sounds as if he’s been in the business for at least a few years. (Although I can’t say the same for the performance in his music video.) Overall, the album is well made and enjoyable. By Lee Hae-joo