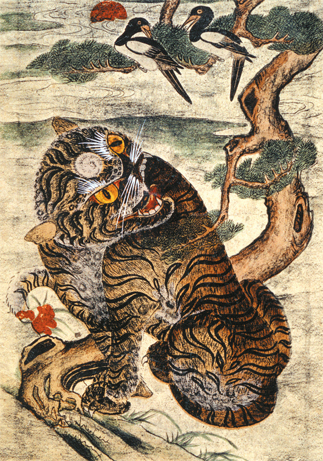 A folk painting featuring a tiger and swallows. [JoongAng Ilbo]

Bedtime stories in Western countries often start with “Once upon a time.” The Korean equivalent is, “Once upon a time when tigers used to smoke.” At least that is how the older generation tells the stories.

Although Siberian tigers were last seen in the wild in Korea in the 1920s, they regularly appear in Korean myths, legends and folktales.

The creation myth of Gojoseon, Korea’s earliest known dynasty, has a tiger as one of its characters. In folktales, tigers display different characteristics - sometimes scary, sometime friendly and sometimes even divine.

Because Koreans have for decades referred to Siberian tigers as Korean tigers or Mount Paektu tigers, many people here believe the animals are native to the Korean Peninsula.

“I wasn’t certain, but I have always assumed there is a breed native to Korean soil, especially those that live on Mount Baekdu,” said Je Ji-yeong who was at Seoul Zoo in Gyeonggi with her boyfriend.

Pyeon Hyeon-su says one of the reasons for this misconception is the animals used to roam extensively over the peninsula. But Pyeon notes that these tigers travel such large distances that they don’t live exclusively on the peninsula.

Siberian tigers haven’t been held in Korean zoos for very long. In 1986, Lotte Group bought three Siberian tigers from overseas and donated them to Seoul Zoo ahead of the 1988 Seoul Olympics. The mascot for the Games was a tiger.

Two of the tigers, named Hodol and Hosun, were national celebrities until they died in 1993 and 1996, respectively.

“Before the Olympics, Seoul Zoo mostly kept Bengal tigers, but after the Olympics we gave them away and kept only the Siberians,” said Kim from Seoul Zoo.

With next year marking the year of the tiger according to the Chinese Zodiac, companies are expected to use this iconic animal to sell various items.