Flamenco? Ballet? Hip-hop? ‘Todes’ dance show has it all

Flamenco? Ballet? Hip-hop? ‘Todes’ dance show has it all 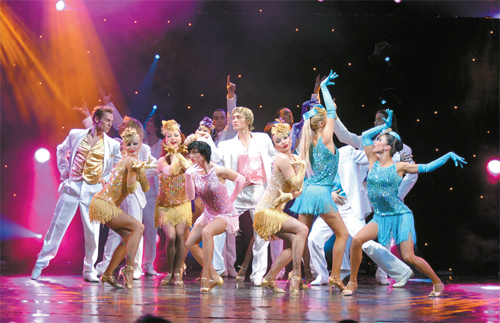 “Alabama,” the eighth dance performance in “Todes,” was inspired by the musical “Chicago.” Provided by Walkerhill Theatre

Variety, as they say, is the spice of life.

And famed Russian producer and choreographer Alla Duhova certainly takes that to heart in her 80-minute show “Todes.”

The performance, which debuted in Korea last Friday at the Sheraton Grande Walkerhill Hotel, features 17 dance numbers that span a variety of genres, from hip-hop to flamenco to ballet. Nearly two dozen dancers bring the show to life, wearing everything from knee-high boots to spacesuits.

“By combining all kinds of different dances, whether they are classical or modern, [the show] represents diversity,” Duhova said. 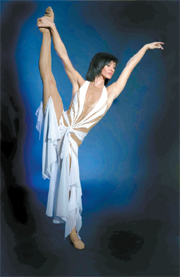 A ballerina from the “I Love You” dance number.

The renowned Russian choreographer started her career as a dancer at the age of 19 but later found stardom through the dance company she founded in 1986 called Todes, named after a move in which a male ice dancer lifts his female partner.

In a world where dance and music styles come and go in a matter of months, Todes has thrived for 23 years in part because of the diversity and, yes, unusual nature of its shows.

The Todes show coming to Korea begins with a group of ballerinas dancing to the main theme of “Swan Lake.” But they are soon joined by buff men clad in shiny costumes resembling spacesuits as the music speeds up. Another segment that features eight male and 10 female dancers jumping and tumbling across a rope on the stage has earned rave reviews from American audiences, according to Kang So-young, manager of the promotional representative team at the Sheraton Grande Walkerhill Hotel.

Korean audiences also will see a flamboyant dance scene inspired by the musical “Chicago,” as well as one that mimics dance performances by music pop idols such as Justin Timberlake.

When asked about the difficulties of mixing various types of dances in one performance, Duhova - who spoke through an interpreter for this interview - said that the “combination of different styles comes from insight.”

Walkerhill Theatre, located in the Sheraton in eastern Seoul, expects that Todes will help the venue maintain its long-held reputation as a top theater in the city.

“Whenever we staged a new show (back in the 1960s and 1970s),” Kang said, “producers from broadcasting stations came to see our show to learn about lighting skills and other production techniques.”