Images of an ailing earth on display

Images of an ailing earth on display 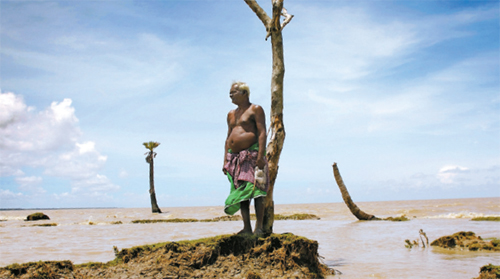 Photograph by Robin Hammond of a man in Ghoramara Island, India, who lost his home to a rising sea. Provided by Daelim Contemporary Art Museum

Most of us are familiar with the concept behind Al Gore’s hit documentary “An Inconvenient Truth.” Mother Nature is reeling, and we’re not doing enough to help her out.

We’ve also heard the drumbeat of dire warnings on the nightly news about the precarious state of the environment, yet it doesn’t seem to affect our everyday lives and therefore ranks lower on the priority list for many of us.

But the effects of climate change can be felt in numerous areas of the world, and photographers have captured the devastation in a series of images on display starting Friday at the Daelim Contemporary Art Museum, located in central Seoul.

Supported by the British Embassy in Korea and the Korean Embassy in the United Kingdom, the “Earth Alert” exhibit features roughly 90 photos by 13 photographers and runs through Aug. 23.

“All the photographers that have been selected for this exhibition are those that have shown constant interest in climate change and global warming,” said Yang Yoon-jung, assistant curator at the Daelim Art Museum.

The exhibition is divided into seven different parts. In the first, called “Harming the Environment,” world-renowned photographer Gerd Ludwig presents scenes from the city of Magnitogorsk, Russia, where men fish in the polluted Ural River.

In another section, “Encroaching Sea, Shifting Glaciers,” Robin Hammond’s photos depict the tiny Pacific island of Tuvalu, one of the earth’s most vulnerable places to global warming. His pieces show how rising sea levels threaten the 10,000 Tuvaluans living on low-lying coral atolls.

“Due to sea level rise, erosion and extreme weather events, [Tuvalu] is shrinking and may eventually disappear,” Hammond said. Other exhibits focus on yellow dust and melting glaciers.

After the exhibition in Seoul, Earth Alert will move to the Korean Culture Centre in London.