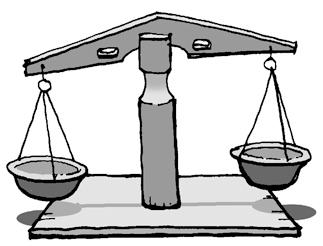 It is not uncommon for people to hang their favorite motto on the wall to be reminded of it as often as possible.

“Motto” is zuoyouming in Chinese and literally means “a phrase that one puts on one’s nearest place.” The first motto in China, however, was not a written phrase as everybody might imagine, but was a container called yiqi.

Duke Huan of the Lu State always kept one container on the right-hand side of his chair and frequently looked at it. This container was special. When it was half-filled with water, it stood upright, but if water was poured to the brim, it tipped over.

The book “Xun Zi” carries the story in which Confucius found the container when he visited Huan’s shrine.

Besides water, the container contained a message - people should refrain from excess and avoid shortage. The device was a reminder about not going to extremes.

That is where the Chinese word zuoyouming originated.

The container that Confucius saw later disappeared. But rulers in coming dynasties tried to reproduce the special container. The last was reproduced by Emperor Kwong Suis of the Qing Dynasty in 1895 and the article is now kept in the Palace Museum in Beijing.

Jiang Jieshi, or Chiang Kai-shek, dominated mainland China in the early 1900s and his earlier name was Zhongzheng, or Chung-cheng, the Chinese characters meaning “middle” and “upright,” respectively. It seems to have originated from what Confucius said: “When filled to the middle, [the container] stands upright.”

He took the new name Kai-shek after he grew up. The name means “maintaining a balance like a flat boulder.” The name represents the attitude of trying to stay at the center in both actions and thoughts. It means not to go to extremes but to embrace both sides.

Confucius, the symbol of Chinese intellectuals, and rulers in China’s dynasties appreciated this value. Chiang Kai-shek even wanted to have this meaning in his name.

Nowadays in Korea, some so-called intellectuals and religious figures condemn the incumbent administration as a “dictatorship” at a time of trouble for the country. Their declarations are extreme.

Only a few would agree that the current political situation is so serious that this time should be referred to as a troubled one. Yet these people continue in their destabilizing acts because they have too parochial a view.

These intellectuals need to refrain from going to extremes when they give their opinions to the public. They need to be careful not to misjudge the situation and get carried away with political extremes.

Only then can they be called intellectuals in the truest sense.