Yet another diet book, with some attitude

Yet another diet book, with some attitude 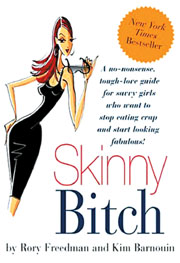 It was only a matter of time before “Skinny Bitch” infiltrated diet-happy, image-obsessed Korea. New to bookstores here, the sassy, irreverent guide to eating has blown up in the United States, earning devotees and detractors alike along the way.

Authors Rory Freedman and Kim Barnouin have parlayed the book’s success into a franchise, penning follow-up cookbook “Skinny Bitch in the Kitch” and a new male-targeted volume, “Skinny Bastard.” It’s easy to see how this has happened, as Skinny Bitch is an easy-to read, entertaining discourse on eating all-organic vegan fare. Chapter titles include “Sugar is the Devil,” “Pooping” and “You Are What You Eat” - the last being a mantra repeated throughout the book, along with “trust no one.”

Freedman and Barnouin present themselves as readers’ “smart-mouthed girlfriends” out to set the record straight on getting skinny. But in encouraging readers to cleanse their diets of processed, fatty and chemically altered foods (which, frankly, should be a no-brainer for anyone serious about eating healthy) they employ “tough love” (read: verbal abuse). Unlike the authors, none of my girlfriends have ever called me a “gluttonous pig” or a “total moron” - we wouldn’t friends if they did.

A lot of the advice in Skinny Bitch does make sense. Of course it’s better to eat fiber-rich whole grains versus simple carbs. No duh, fresh fruits and vegetables are healthy. Your doctor will prefer that you eat a handful of raw almonds over a bag of potato chips. Soda just isn’t good for you. This is all plain common sense - even if most Americans choose to ignore it.

But to the average reader, especially in Korea, where vegetarians complain about their lack of options, it’s damn near impossible to adhere to the authors’ food regimen. The book’s arguments for going vegan do have their merits, both in terms of health and ethics. But veganism isn’t the only way to be skinny, despite what they say. Also, as a vegan friend was quick to point out, while the authors condemn processed foods, they do make an exception for the processed, ready-made vegan concoctions they promote.

Then there’s drinking. Touting the idea that “habitual drinking equals fat-pig syndrome,” Freedman and Barnouin demand that readers cut all drinking from their diets - except organic red wine. A nice idea, but one not easily adhered to in a country where many adults drink heavily and almost no one is a “fat pig.”

The same goes for the organic requirement of the Skinny Bitch method. While Freedman and Barnouin are clearly able to afford organic produce, it’s likely that many readers can’t. Their response? “Don’t be a cheap asshole.” They claim that despite spending more on food, true Skinny Bitches will save money over time by preparing their own meals. But as I’ve learned from my own experience, it’s not always easy to find time to pack a lunch or cook dinner.

Most worrisome is the questionable qualifications of the writers. Freedman is a “self-taught know-it-all,” while Barnouin has a master’s in holistic nutrition. This, apparently, gives them license to claim the U.S. Department of Health and Human Services, Department of Agriculture and Food and Drug Administration are engaged in a wild conspiracy to force meat and dairy down people’s throats. While the duo repeats “trust no one” (except themselves, of course) this part of the book veers into wackiness.

So by no means should anyone use Skinny Bitch as a dining bible. But if readers are looking for a book to convince themselves to eat healthier, this one can help. Just make sure to be critical - as you would be while listening to a kooky girlfriend singing the praises of her new diet.