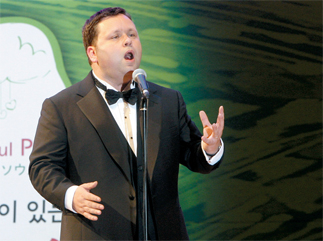 One day in the small town of Bridgend, Wales, a man was having trouble making up his mind about whether to audition for a talent contest, so he decided to flip a coin: heads he would, tails he wouldn’t.

And thus began the story of the world’s most famous cell phone salesman.

Two years ago, he stepped onto the stage “to sing opera” in “Britain’s Got Talent.” Now, Paul Potts is one of the most widely known tenors in the world today.

Potts said in a press conference on Tuesday at the Westin Chosun Hotel that he was “very excited to be back in this fantastic country” for his second visit.

On his first visit last summer, the tenor presented concerts in Seoul and Busan that were well received by audiences. At the time, the singer had posted on his official Web site that he “enjoyed [all the performances] immensely” and that “the concerts were some of the most enjoyable” he had given.

At the press conference, Potts also talked about his affection for his latest album.

“I am unbelievably excited and proud of this album, which has a completely different flavor from ‘One Chance,’” he said, referring to his first album.

“I have worked with some amazing people in Europe to create a beautiful album full of the passion that I feel for music,” he enthused.

He added that he felt some stress about the creation of his sophomore effort.

“The second album is always a challenge. When your first is such a success, you cannot be complacent and believe the second will do the same. There is more pressure, you have to work harder, be bigger, better. This is the same for every artist.”

After the press conference, Potts presented a special performance for about 200 fans at the Westin Chosun, singing five songs including “Il Canto,” “Tristesse” and “E Lucevan Le Stelle,” all from Passione.

The crowd cheered warmly after every song, while the tenor bowed and repeated “thank you” in Korean. After the performance, the singer signed autographs for his adoring fans.

“He was tired from his long tour, just arriving from Japan,” said Bae Yu-na of Sony Music Korea. “But he was in good spirits, wanting to hang around with Korean fans after the show.”

Potts was not just tired from his promotional world tour. The day before, he had given his Korean fans an hour-long concert at Seoul City Hall Plaza.

“There were people from all across the nation who came to Seoul on Monday evening to watch Paul sing,” said Bae. “The event wasn’t just for Seoul citizens, it was for all Koreans.”

Potts says that he hopes to be back in Korea early next year.

“He wants to have a concert here to meet his Korean fans again,” Bae said.

The tenor left for Hong Kong last Wednesday, but fans will still be able to hear his voice through his songs on Passione.