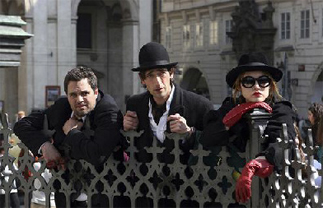 Where does the lie begin?

This is the question you’re left with after watching “The Brothers Bloom,” which opened in theaters yesterday.

Two brothers, Stephen (Mark Ruffalo) and Bloom (Adrien Brody), are orphans who manage to carry out a number of ingenious cons while being sent from foster home to foster home. For them, the thrill comes when everyone, including the person being conned, gets just what they want in the end.

The older of the two, Stephen, devises the elaborate schemes while his younger brother Bloom carries them out by posing as a variety of different characters.

In essence, Stephen maps out every detail of these cons, and thus their lives, to a “T.”

But Bloom, who has spent much of his life pretending to be other people, is unsure of his own identity. Confused and lost, Bloom wants out of the game after one last hit on a beautiful, eccentric millionaire, Penelope Stamp (Rachel Weisz).

It’s amusing that it takes Penelope, someone so clueless about the lives of everyday people, to help Bloom figure out who he is, as she teaches him that life shouldn’t be all about worries and restrictions.

I tend to think life is difficult because of its non-negotiable nature of twists and turns that we are simply forced to accept. But the movie never distinguishes between what parts of the story are all a part of Stephen’s perfectly plotted master plan and what parts are tied to the unpredictable nature of everyday life. At one point, Stephen leaves Penelope with these words: “there is no such thing as an unwritten life, just a badly written one.”

In the end, Stephen did write up the perfect con. I won’t give anything away, but it’s safe to say that everyone pretty much gets what they want.

After seeing the movie, the plot overtook me as I curled up on a comfortable sofa next to a window at a very crowded cafe on a very crowded street to write this review. The crowds made me contemplate just how many people’s lives do end up the way they planned.

I am no mathematician, but I am betting good money that the numbers are pretty slim.

Heck, it’s hard for me to even keep a lunch date, let alone draw up a plan for my entire life.

But maybe it’s not such a horrible thing to have everything well organized and then act it all out exactly as it is written on paper.

This movie also made me wonder about the numerous roles each of us play in real life. How many personalities and characters do we use in our own lives to hide our true colors?