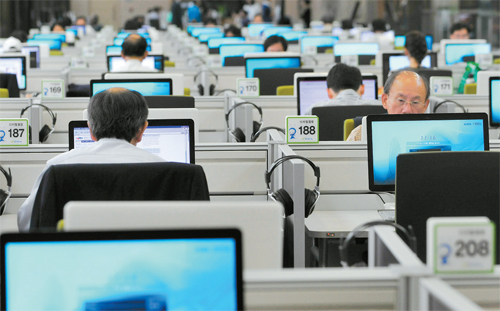 Inside the Productivity Computer Cluster on the second floor, which is the core of the National Digital Library. Here, people can access 116 million pieces of digital content. By Jeon Min-kyu

With booths where visitors can create their own digital content, surf the Web or browse the library’s ever-expanding collection of 116 million pieces of digitized material from around the world, Dibrary is a multimedia center providing access to all this and more with the click of a mouse.

Although “there are other digital libraries in other countries, such as the Europeana, most of them only exist online,” said Mo Chul-min, the library’s director.

These days, traditional libraries with real books generally have a digital component, but few are entirely devoted to digitized content, he said. 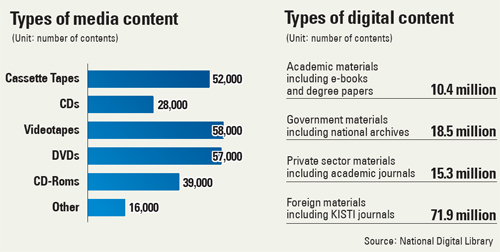 Dibrary, a portmanteau of “digital” and “library,” sits next to the National Library of Korea, from which it draws much of its source material. A virtual network connects the two and provides access to materials at other libraries nationwide. The library’s aim is to serve as a repository for the growing amount of digital content and provide the public with access to these resources.

The plan to create an integrated library network was hatched in 2000 by the Ministry of Culture and Tourism and construction of the building was completed last year. Since it opened on May 27, over 1,000 people have passed through its halls each day.

The building itself is a bit of a high-tech haven. Upon entering, visitors are greeted by dozens of screens equipped with sensors that respond to movement by flashing different images. Inside, the Global Lounge, NDL Arts Gallery and digital newsstands are just a few of the futuristic facilities on hand.

The Global Lounge has dozens of computers equipped with the Windows operating system running in English, Chinese, Japanese, French and Vietnamese, and a small number of television sets showing satellite television programs in Vietnamese, Tagalog, French and Thai. The NDL Arts Gallery displays digital art in a series of rotating exhibitions. And the digital newsstands are large touch-screen monitors on which visitors can read virtual newspapers.

People with portable computers can work in the Laptop Zone or at other stations around the library complex.

Amateur directors interested in creating and editing their own digital content can do so in special studios that are open to anyone; the final product is shown on screens throughout the library complex. Professionals can use the advanced media facilities, including a video and audio recording studio and digital editing zone.

But it’s not all play. The library offers eight small Digital Meeting Rooms that come outfitted with LCD monitors and beam projectors, as well as an e-board - a white board that sends the information written on it to anyone in the room via e-mail. The library also has larger conference rooms that come similarly equipped.

In an area called the Productivity Computer Cluster, 252 computers provide access to the library’s entire collection. It currently has over 380,000 e-books, with thousands more from the National Library’s collection to be added each year.

Though a large portion of that collection consists of materials in Korean, the library also provides access to digitized content from the many countries in its database.

“Rather than visiting Web sites in different countries, visitors can search and access the content at the Dibrary portal, saving time and effort,” said Ryu Eun-young, a librarian at the library’s information technology division.

For example, if a user is searching for an academic paper about global warming, the Dibrary portal provides access to hundreds of materials from libraries at universities including Cornell and Columbia in the United States, Cambridge and Oxford in Britain and Nagoya and Nagasaki in Japan. If the material is copyrighted, the full text can only be accessed from the library itself, though a search can be conducted from any place with an Internet connection. Materials in the public domain can be accessed from anywhere.

“There are only a few places in Korea where people can search for degree theses from foreign countries like China,” said Kim Mi-kyung, a graduate student majoring in Chinese literature at Inha University. “My school doesn’t have access so I came here.”

According to Ryu, Dibrary also has contracts with digital archives such as American Memory, the digital collection of the U.S. Library of Congress, Australia’s Arrow Discovery Service and Japan’s University of Tokyo Depository.

“I can access most of the books published in Korea online [at Dibrary],” said Kim Byeong-hyeon, a Kyung Hee University student majoring in oriental medicine.

And if after all that virtual searching, all you want to do is relax, there are four movie multiplexes, where small groups can watch movies on DVD from the library’s collection of over 250,000 titles. Solo visitors can sit at their own individual stations and watch movies in the Media Center.

“The Dibrary portal is a gateway to all of this information,” Ryu said.