Several of Seoul’s shelters from the storm

Several of Seoul’s shelters from the storm 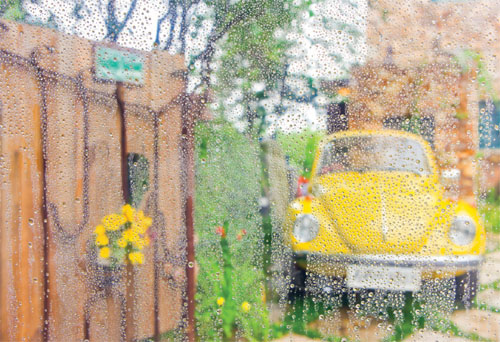 A yellow Volkswagen Beetle parked outside Sanmotungi cafe brightens up a rainy day. By Kwon Hyuk-jae

There is a poem titled “The Rainy Day” by American poet Henry Wadsworth Longfellow.

“Be still, sad heart! and cease repining; / Behind the clouds is the sun still shining; / Thy fate is the common fate of all, / Into each life some rain must fall, / Some days must be dark and dreary.”

Longfellow may have tried to be consoling, but the poet is still being quite frank about one thing: Rainy days are “dark and dreary.” He’s right. When it’s wet and pouring, you can’t help but get lonely and depressed. That is why you feel like being alone. Sometimes you just want to curl up in bed, think about nothing, and sleep until the sun shines the next day (that is, if it shines the next day). Or, in other cases, you may want to call up a friend and drink to the sound of raindrops tapping on your windowpanes ? some nice background music for your endless conversation.

But when summer rain is a constant annual guest this time of year, there are more than a few ways to welcome it.

Sogul (02-338-3014), near the Hongdae area, is a small, quiet bar with only six tables. Musicians come from time to time with guitar in hand to perform. At other times, visitors play the instruments available there.

The little bar doesn’t even have a fancy sign for itself; only the people who know Sogul recognize the small box at its entrance. If there is a candle lit in the box, it means the bar is open.

So what draws people to this secret hideout? One of the reasons may be the bar’s tin roof. When it’s pouring, raindrops beat against it as if someone is playing a snare drum.

Down south in Sinsa-dong, there’s Coffee Smith (02-3445-3372), a two-story cafe constructed in a unique fashion. The first floor of the building is designed as a wide, roofed terrace. On rainy days, customers can listen to the sound of showers while enjoying their drinks outside.

If you want to see the Han River during the wet summer season, Seogangpalgyeong (02-334-1919) in Sangsu-dong presents a view of the river flowing across Yeouido, Bam Island, and Seogang Bridge. The scenery is especially beautiful when its sprinkling outside during a foggy day.

Sanmotungi (02-391-4747) is another place where rain adds sentimental flavor to the city’s panorama. The cafe, which became widely known as the film set for the hit 2007 MBC-TV drama “Coffee Prince Branch No. 1,” is located in Buam-dong, central Seoul. From the cafe, people can see the view of Mount Bugak and Mount Inwang. From time to time on rainy days, light fog wraps itself around the two mountains, which attracts many visitors.

Top Cloud (02-2230-3000), a restaurant located in Jongno District, is one of Seoul’s most popular places for couples. The restaurant is on the 33rd floor of Jongno Tower, presenting guests with an expansive view of the nation’s dynamic capital. All four walls at Top Cloud are glass, giving visitors vistas of N Seoul Tower, the streets of Myeong-dong, Gyeongbok Palace and the Blue House.

The Architectural Garden at Sungkok Art Museum (02-737-7650), central Seoul, is often called “an oasis inside the city.”

With more than 100 trees that are several decades old, the garden is a peaceful place away from the busy streets of Seoul.

Walking through a wooden walkway, past sculptures and displays by famous artists, there is a small cafe that serves tea, coffee, and cookies. The cafe and the garden are open from 10 a.m. to 6 p.m.